A new company is looking to do for B2B hardware sales what a growing number of companies have been doing in the consumer sphere, by making it easier for businesses to pay for equipment in instalments through rentals and subscriptions.

While companies such as Klarna and Affirm have been pushing payment services that help consumers procure goods without having to pay for everything up front, Berlin-based startup Topi launched out of stealth last December with $4.5 million in funding to do something similar for B2B transactions. At the time, Topi was somewhat vague in terms of what its actual product would be, but the company today announced its first product in partnership with German electronics retailer Gravis, and unveiled a fresh $45 million in equity and debt financing.

At its most basic level, Topi is selling a hardware-as-a-service business model, allowing merchants to rent out their equipment such as smartphones, printers, PC monitors, coffee machines, robotic arms, or whatever industry-specific machinery they specialize in. While it’s true that many merchants offer financing options already that allow businesses to stagger their payments, this isn’t typically integrated directly into the checkout process — and that, effectively, is what Topi is bringing to the table. 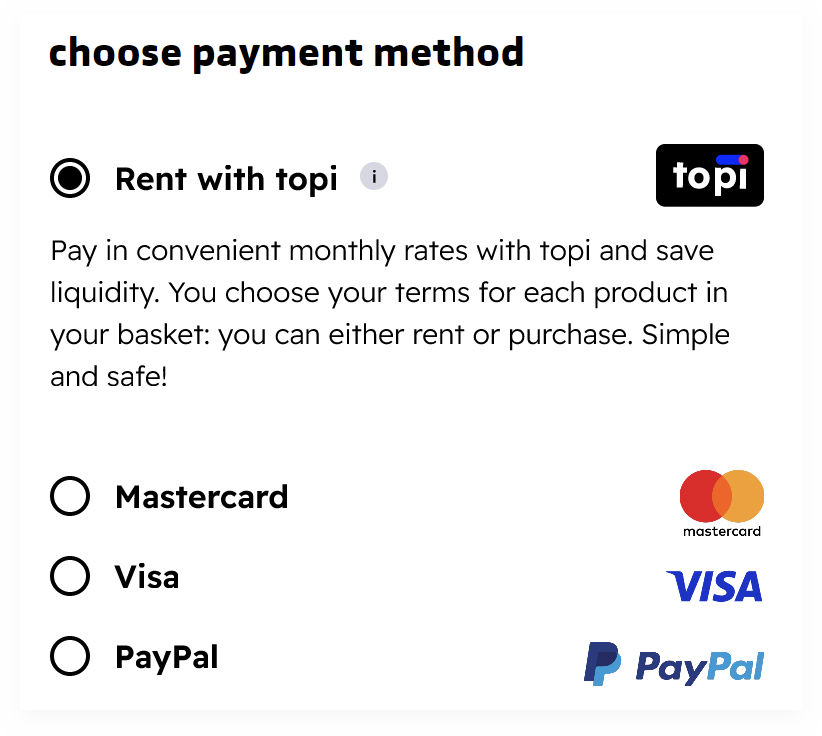 The problem, ultimately, is that companies can spend thousands of dollars up-front on physical goods that are essential to their operations, leaving them with limited capital for other business-critical purchases. On top of that, products that they buy might be outdated or obsolete in just a few years.

In tandem, with businesses across the industrial spectrum tightening their purse strings due to economic pressures, merchants will be looking for new ways to encourage their customers to continue spending money, even if it means on slightly different terms.

Topi essentially brings together the various components that a seller might need to offer hardware subscriptions, including insurance, logistics, and refinancing providers, so that merchants can easily build rentals into their existing online channels using Topi’s APIs. So for example, an electronics retailer might offer a €1,000 MacBook Air for a monthly fee of €26.25 payable over three years with a full warranty included, after which the customer can decide to upgrade to the latest MacBook model, return the device, or pay the remainder of the balance to own the laptop outright. In the future, Topi will also offer Klarna-style instalment payment options for customers who know in advance that they want to own the product at the end.

It’s worth noting that Topi also supports up-front purchases, so that a customer can decide to rent an iPhone at the checkout for a two-year period, while buying a laptop outright. Topi is pitched as a modular platform, so that merchants can pick and choose which elements they want — they can select just monthly billing and credit checks, to the full shebang including refinancing partners and insurance.

Additionally, while the Topi branding is prominent at checkout with the inaugural product, the company said that it plans to offer a white-labeled version that allows businesses to include their own logo.

A quick peek across the consumer technology sphere reveals a steady transition from ownership to access. This is evidenced in fields such as music, where subscription streaming services from the likes of Spotify and Apple Music now outweigh physical format or download sales. And the so-called circular economy is driving demand for consumer electronics rentals that includes smartphones, and even automobile subscription services.

There is evidence of this shift elsewhere in the B2B space too, with Munich-based Klarx specializing in construction equipment rentals. So it’s clear there is a movement away from ownership, something that Topi cofounder Charlotte Pallua said other merchants must take note of if they’re to stay ahead of the curve.

“If traditional retailers want to stay competitive and not lose their customers to those retailers, they will need to start offering subscriptions as a payment option,” Pallua told TechCrunch.

Pallua previous worked as a strategy and business development manager at Apple in the San Francisco Bay Area, where she led a team tasked with exploring the feasibility of hardware subscriptions — Apple has yet to launch such a service, but reports continue to surface that the Cupertino company is still looking to bolster its recurring revenue via such subscriptions. Pallua met her cofounder Estelle Merle while at Harvard Business School in Boston, and the duo cemented their friendship out in Silicon Valley where Merle worked briefly at Tesla during her MBA before landing at German mobility startup Via.

A year on from its foundation, Pallua and Merle are now ready to launch their businesses in partnership with Gravis, an Apple authorized reseller which has 40 physical outlets in Germany in addition to its online store. Gravis was a key partner as Topi iterated its product through its pilot phase.

“We are excited that our business customers can now easily subscribe to their IT equipment in real-time at the point of transaction, without tedious processes and bureaucratic paperwork,” Gravis managing director Jan Sperlich said in a statement. “In our pilot phase, around half of our customers that rented hardware through Topi came back for additional products.”

But arguably more important than all of that, Topi isn’t just focused on improving access to hardware or helping companies’ cashflows — they see sustainability as a core underlying selling point behind its product.

“In light of climate change, being sustainable is increasingly important for companies,” Pallua said. “Used devices should be given a second life or properly recycled — a drawer full of old devices should no longer exist.”

Topi’s funding round constituted $15 million in equity and $30 million in debt, with backers including Index Ventures, Creandum, TriplePoint Capital, and undisclosed angel investors.