‘Top Widgets’ soars to No 1 on the App Store, displacing BeReal, as iOS 16 customization takes off

As iOS 16 Lock Screen customization takes off, an iPhone personalization app called Top Widgets has soared to the No. 1 spot on the U.S. App Store’s top free apps list, displacing BeReal. The Sichuan, China-based app maker first introduced Top Widgets in August 2020 to capitalize on the introduction of Home Screen widgets with the release of iOS 14. With its newly added support for iOS 16’s Lock Screen widgets, the app has gained approximately 1.3 million downloads in the two days following Monday’s iOS 16 launch.

That’s up 1,812% from the two days prior to iOS 16’s release, when the app saw approximately 68,000 installs, according to data from mobile intelligence firm Sensor Tower.

To date, Top Widgets has topped 30 million worldwide installs, the firm says. The majority are from the company’s home country of China, which accounts for around 25.8 million lifetime downloads, or 86% of the total. The U.S., by comparison, is a smaller market for this app, with some 730,000 installs to date, or 2% of the total.

In addition to ranking in the No. 1 position on the U.S. App Store as of Thursday, the app is also No. 1 in 58 other global markets. It’s the No. 1 app in the Utilities category in 80 markets.

Top Widgets is similar in some ways to other popular widget designers, like Widgetsmith — one of the more successful apps to emerge from the original iPhone customization craze, thanks to its DIY tools for creating custom widgets that match your overall iPhone theme, wallpaper and icons. (In fact, Top Widgets even stuffs the keyword “widgetsmith” into its App Store description!) 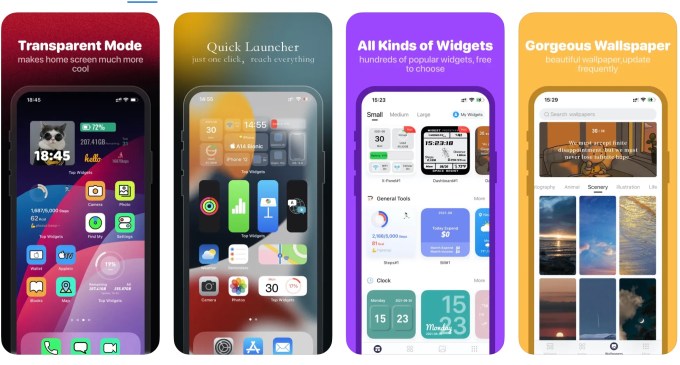 But it also includes a few features that differentiate it from other widget apps on the market, including a transparent widget type that doesn’t block your iPhone’s background wallpaper as well as a variety of “quick launcher” widget styles that let you put tappable access to favorite apps in a widget format — which offers more customization possibilities compared with the use of app icons.

In addition, the app includes an interesting widget type it calls “x-panel,” which puts a variety of informational blocks — like battery percentage, storage space used, Wi-Fi toggles and more — into a single dashboard-like widget that can be pinned to your Home Screen.

With its iOS 16 release, this x-panel style widget has now been ported to the Lock Screen, providing a tiny dashboard of information about your phone you can view without having to unlock your device. This could be useful for those who want more at-a-glance information available, since the current Lock Screen design limits the number of widgets that can be added. (But you’ll need good eyesight to read it!) 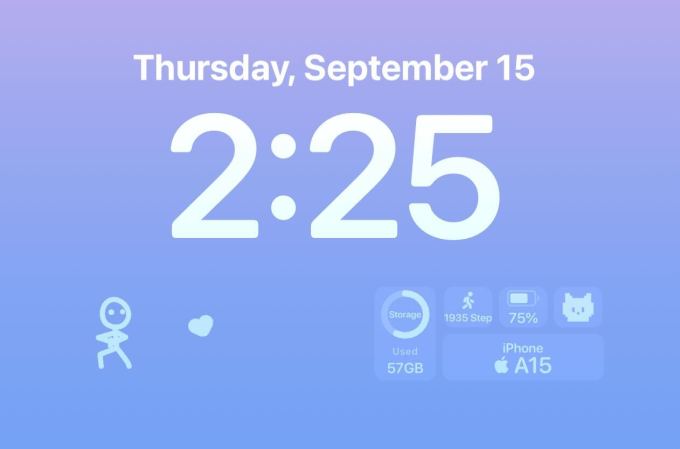 The iOS 16 version of the Top Widgets app also offers a number of other Lock Screen widget types — like animations and cartoons that cleverly use the Lock Screen’s rectangular widget designs to create an image stretched across two widgets placed side-by-side.

For example, you can add two Lock Screen widgets with a cupid shooting his arrow through a beating heart or watch as a bunny inflates a balloon. Or, if you prefer to use square widgets, the app offers a set of smaller emoji-like widgets that could to be added together in a row, including things like a smiley, heart, and little chick.

These sorts of widgets have an obvious appeal to a younger, Gen Z crowd, who may be more interested in personalizing their Lock Screen with cute characters, designs and animations, rather than the sort of “boring” information an adult would want to see — like their next calendar appointment, emails, or reminders, for instance.

Naturally, this found the app featured in a variety of TikTok videos this week, including one top viral video that’s now pulled in over 514,000 views and has been bookmarked 87.4K times.

@tinylittleangel.77 I’m in love &lt3 APPS USED: TOP WIDGETS #ios16#ios16features#iosupdate#ios14homescreen#ios16new#iphone#iphone11#topwidgets#widgetsmith#fyp#fypage#xyzbca♬ there is a light and it never goes out spedup – posh ?

While the App Store’s Top Charts algorithm has historically relied on factors like the number of installs and the velocity of those installs, among other factors, it’s now being regularly manipulated by TikTok-based marketing efforts. It’s likely this viral video and others featuring the widget are behind many of Top Widgets’ new U.S. installs these past few days.

The app itself is published under the developer name of Chengdu Guluoying Technology Co. and points to the website xiaozujian.com. No developer names or contact information, beyond a postal mailing address, is provided on its site. TechCrunch attempted to reach the company through various standard email addresses ahead of publication. We did not hear back.