TikTok launched a new feature today that is basically just a copy of BeReal, the buzzy French social app that’s been steadily gaining popularity. BeReal invites users to take a front and back camera photo at a random time every day, designed to capture a more authentic picture of what our friends are doing all day (but, of course, you can just wait to post until you’re doing something interesting). Snapchat and Instagram have already launched front and back camera features, and Instagram is rumored to be working on its on time-based, ephemeral feature. But TikTok beat its competitors to the punch by being the first app to just outright cut-and-paste BeReal into its platform.

“TikTok Now invites you and your friends to capture what you’re doing in the moment using your device’s front and back camera,” the company’s blog reads. “You’ll receive a daily prompt to capture a 10-second video or a static photo to easily share what you’re up to.”

Every day when the BeReal goes out, users get a push notification telling them that “it’s time to BeReal,” bookended by alert emojis. TikTok’s notification looks the same — users are notified between lightning emojis that it is “Time to Now,” which admittedly does not have the same ring to it as BeReal. 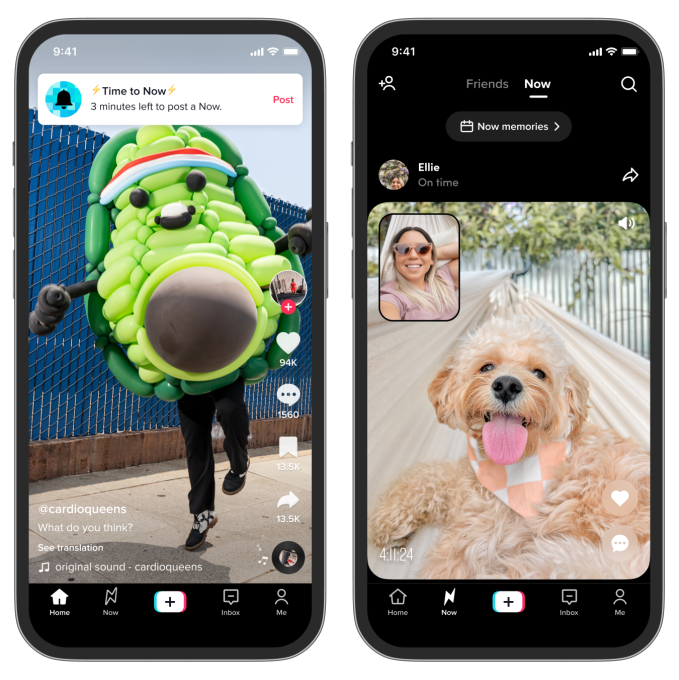 TikTok says that the feature is now available for US users. In the mockup images, it looks like “Now” has earned valuable real estate on the bottom navigation bar, next to the posting button. On our end at least, we don’t see the feature yet. TikTok added that in other regions, TikTok Now may be downloadable as a standalone app.

BeReal comes with its own privacy concerns — if you aren’t careful to turn off your location, you might accidentally be sharing exactly where you live, down to the street name, with all of your friends. Sure, BeReal is intended for use in your main social circle, but come on. It’s the internet. There’s a public feed! In the mockup images TikTok shared, location doesn’t appear to be part of the TikTok Now interface.

So, at launch, TikTok Now has some built in privacy features. Like TikTok itself, if someone under the age of 16 registers for a standalone TikTok Now app, their account will be set to private by default. Plus, users must be 18 to share their TikTok Now posts on the Explore Feed. For users 13 to 15, only your friends — people you follow who follow you back — will be able to comment on your posts. Even for users 18+, the default setting will allow only friends to view your posts, even though they can change their settings to share with the world if they so desire.

It always feels like a bit of a cheap shot when all the social apps copy each other. How many apps have a TikTok clone now? But BeReal isn’t part of a massive tech giant like Instagram or YouTube — according to Crunchbase, the company has fewer than 50 employees. So it goes.

Instagram’s latest feature test is about being BeReal