Headquartered in Singapore, proptech startup Propseller is on a mission to make real estate transactions more efficient and data-driven for sellers and buyers alike. Its platform is able to tell users the likelihood of a conversion each step of the way. Today Propseller announced it has raised $12 million in Series A funding led by Vertex Ventures Southeast Asia and India.

Founded in 2018, Propseller will use its Series A to scale its business model, expand its offerings and enter overseas markets. It currently has about 50 employees, including 20 salaried real estate agents (or consultants, as the startup calls them), and plans to hire 200 more people for its marketing, operations, product, engineering and sales and real estate teams. 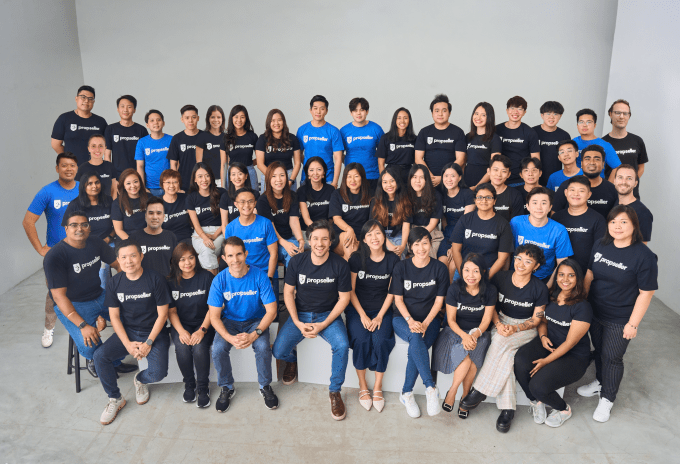 Jorge became interested in real estate while growing up in Nice, France. He says people from his family either became engineers or real estate agents, and he noticed that the latter group made more money than the engineers. Curious, Jorge joined his mother’s real estate agency at the age of 14 and stayed there until he was 22. But when his grandfather asked if the wanted to take over the business, Jorge decided not to.

One of his reasons was that the traditional real estate agency model was hard to scale and very manual, and often charged commissions that are hard to justify. Instead, Jorge went on to work for tech companies, including six years at Groupon, where he was in positions including general manager of Southeast Asia.

While looking for investment opportunities, Jorge experienced the hassle of buying real estate in Southeast Asia. For example, he says that property prices are often high, but service from traditional brokerages often leave much to be desired. He attributes this to the fragmentation of Southeast Asia’s real estate market, with 200,000 agents across Southeast Asia, who close on average only two transactions per year.

As a result, Jorge saw an opportunity to build a platform to help people sell their homes more quickly, with transparency and the least amount of hassle.

The reason why Propseller calls its licensed real estate agents consultants is because the company’s automation gives them the time to work on client relationships. On average, Propseller’s consultants close about 55 sales transactions per year, which also means they make more revenue.

“We are very likely the only company in Singapore to tell you what is the expected conversion rate of buyer leads coming from PropertyGuru or 99.co,” said Jorge. This means when a lead is generated, it can be tracked from start to finish, so sellers and consultants know how likely a successful closing is at every step of the process.

Viewings generally take place offline, but Propseller also makes video and VR viewings for each property. Sellers can stay on top of the process with a dashboard that shows them which channels their property is being distributed on, inquiries generated, scheduled viewings and offers.

The COVID pandemic has made people more willing to buy large-ticket items online and many who will continue to work from home are seeking a larger property. As the pandemic subsides gradually, Jorge believes these trends will stick around.

The company’s main competition are the 34,000 independent agents in Singapore, who own about 99% of the real estate market share. Proptech competitors include Ohmyhome and Bluenest in Singapore, and similar models include Red Fin in the U.S. and Flyhomes to a certain extent, Jorge said.

Propseller is setting itself apart with an end-to-end real estate transaction platform, Jorge said. “We have broken down every step of the process, recording everything that happens and we are able to record data that no one else has and identify how that process can be optimized to get the best results.”

In a prepared statement, Vertex Ventures Southeast Asia and India managing partner Carmen Yuen said that Propseller is “revolutionizing the way we transact our homes in a more cost and time-efficient way, using technology and data. We’ve followed the Propseller team for more than two years now, and they have demonstrated impressive resilience and growth over the years.”

Proptech still has fundamental problems for entrepreneurs to solve