Supply chain and fleet management solutions company Ryder is partnering with yet another autonomous trucking company. On Thursday, Ryder announced its plans to help Embark launch a nationwide network of up to 100 transfer points that will be owned and operated by the autonomous trucking developer.

This is Ryder’s third public partnership with autonomous trucking companies. It recently announced plans that are currently underway to help Waymo Via scale its autonomous trucking business by helping with standardized fleet maintenance and management. Ryder is also working with TuSimple to leverage its own facilities as terminals for the startup.

“We’re on the cutting edge and really beginning to understand that AV could have a pretty significant role in the future of transportation logistics, so we want to get in as early as possible and start working with these companies that seem to be dominating the market with their technologies,” Karen Jones, Ryder’s EVP for new product innovation, told TechCrunch.

While Ryder has been in talks with other AV companies like Kodiak, Aurora and Plus, Jones said no other deals are in the pipeline. Jones says Ryder is hoping to learn and grow through the different use cases its existing partnerships provide, as well as come up with a replicable transfer hub model that will help the company go to market faster.

“I think as we move this technology forward there’s still a lot of unknowns about how to maintain, how to service and how to operate,” said Jones. “Ryder is a natural fit to partner with because we have huge facilities for maintenance, and then we also have our supply chain and logistics business. We are a real operator that knows how these facilities and the complexities of getting vehicles in and out for delivery to larger facilities work.”

As part of its partnership with Embark, Ryder will provide yard operations, maintenance and fleet management. It will also play an advisory role on Embark’s network of strategically located transfer points where freight is moved from driverless long-haul trucks to driver-controlled trucks for first- and last-mile delivery.

Ryder is helping Embark to understand what’s required at the facilities and cooperating with Embark’s third-party partners who will either be constructing or locating sites for these facilities, says Jones. At the start, the companies will select sites in key freight markets in California, Arizona, Texas, Georgia, Tennessee and Florida through which Embark will be able to begin operations early next year in preparation for a larger commercial launch in 2024. 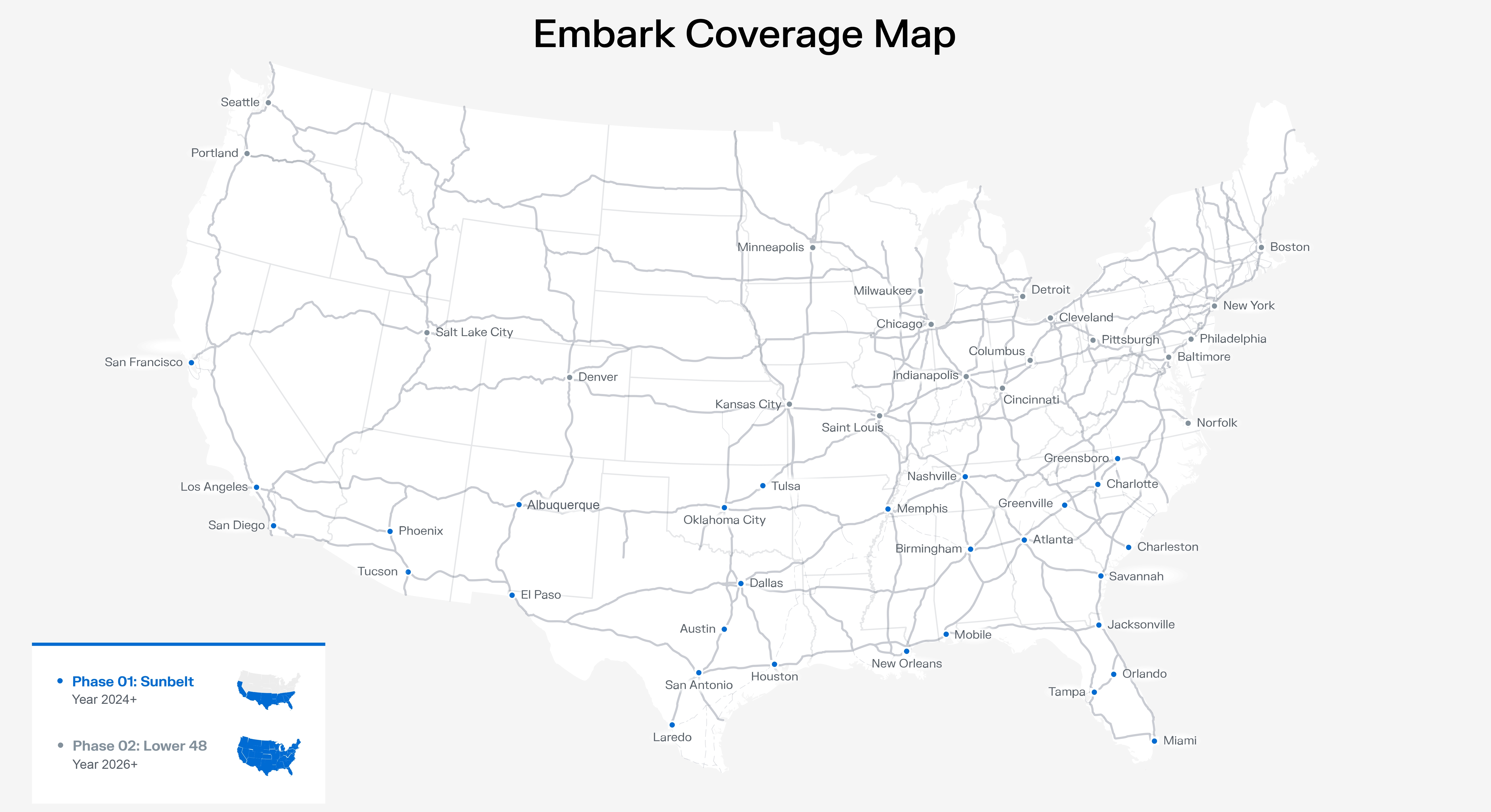 Autonomous companies often choose Sun Belt regions to begin operations because it’s rare to have to account for inclement weather patterns like snow and sleet, making the environment optimal for testing. But over the next five years, Embark and Ryder aim to work with a network of real estate operators to open 100 Embark transfer points across the country.

Currently, Embark, which recently announced plans to go public via a SPAC deal, moves freight for companies like HP and Budweiser makers AB inBev, as well as Knight Swift Transportation, Werner Enterprises and other “top 25 U.S. truckload carriers,” according to CEO Alex Rodrigues.

Rodrigues says Embark’s current freight partnerships are either pilots or smaller scale versions of what the company plans to launch in the future. The company has a fleet of 16 trucks today that operate exclusively on highways with a human safety operator in the front seat just in case, but usually, the driver does not have to take over, even if the AV encounters a new scenario.

Operating only on highways means building out a network of off-highway transfer hubs, which is actually pretty essential, even though it will require a lot of capital and time to scale. TuSimple, by comparison, operates on both highways and surface streets, or streets that are not part of a freeway and have at-grade intersections with other surface streets. The startup’s AVs don’t go into residential areas, and thus don’t perform last-mile delivery, but they are able to access distribution centers and warehouse facilities more easily, according to TuSimple. This capability allows the startup to use existing Ryder locations and retrofit them to serve as TuSimple terminals, rather than building out new terminals, like what Embark is doing.

Waymo Via is also building its own hubs, and Ryder’s fleet maintenance, inspections and roadside assistance will help the autonomous trucking arm of Waymo scale those sites as well as maximize vehicle uptime and reliability.

As Ryder lends its varied capabilities to all of these different use cases, it is able to consider its own potential in the AV space, and not just in the logistics of it all. Jones said the company is open to operating an autonomous fleet one day if it makes sense to do so on behalf of a customer, and is also very entrenched in its first- and last-mile delivery services.

“There’s a number of spaces for Ryder to play as the whole AV initiative evolves, but our first foray into this is really servicing and beginning to understand the technology, as well as the requirements for operating hubs,” said Jones.