Roblox outage helped boost games like Among Us and Minecraft, report finds

Roblox’s three-dayHalloween weekend outage benefitted other popular gaming apps, according to new data from mobile intelligence firm Sensor Tower. In a rare, but unfortunately timed outage event, Roblox’s gaming platform went down on the evening on October 28 and didn’t return until October 31, leading to gains in apps also favored by Roblox’s younger users, including Minecraft, Among Us, and, possibly, Twitch.

Based on Sensor Tower’s panel of installs, users continued to try to access the Roblox app while it was down. This resulted in some form of “time spent” in the Roblox app during the outage. But overall, the average time spent in the app was down by 93% week-over-week, the firm reported.

Meanwhile, Minecraft’s usage saw a 2% week-over-week boost in usage during the same period between Oct. 29 to 31, and Among Us surged upwards by 6%. These jumps are likely a result of Roblox users looking for another game to visit over the weekend where they could also network with friends, as they had planned. In addition, Among Us usage jumped 12% on October 29 compared with the day prior to the outage, and Minecraft usage was bumped up 13%. 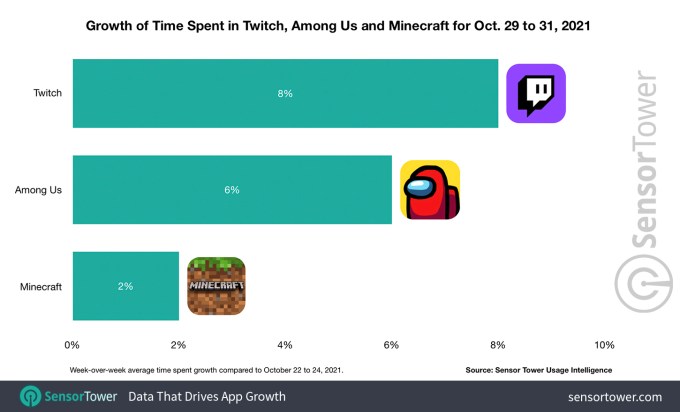 The firm also took a look at the game-streaming app Twitch, and found time spent in the app had grown by 8% week-over-week and saw an 11% increase in average session count. But in this case, not all the growth may be attributed directly to the Roblox downtime. Sensor Tower also notes that Twitch was hosting the League of Legends semi-finals over the Halloween weekend, and it was featuring many special holiday streams from popular gamers.

In addition to capturing gamers’ time and attention, the Roblox outage may have also played a role in boosting other apps’ installs, the report said. 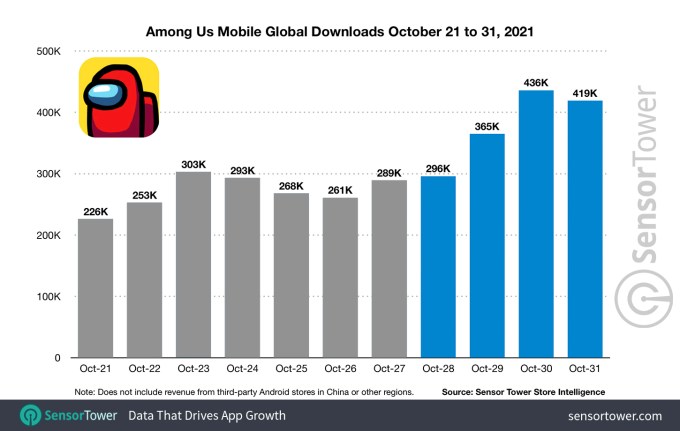 Roblox has since attributed its outage to a combination of factors. It said a core system in its infrastructure was overwhelmed due to a “subtle bug” in its backend service communications while under a heavy load. The company dismissed the rumors this was due to the Chiptole free burrito promo — the chain was going to give out $1 million worth of free burritos to players. The promo had just begun running just before the systems crashed. But Roblox said the disruption was not caused by any “experiences or partnerships” on its platform.

The outage followed Roblox’s announcement of a number of significant changes coming to its platform. In addition to the recently launched voice chat system, the company also said it would update its player avatars to be more realistic and be able to sport layered and more personalized clothing, and would support an NFT-like system for selling digital items in-game.

The company said it would publish a more detailed post-mortem after its analysis of the outage is complete.

The timing of the disruption was significant. While other games may have been boosted, as a result, Roblox lost money. It had planned a series of Halloween events on its platform across a number of games, including Royale High, Super Golf, and themed games like Ghostopia and Spirits of Hallows Eve, and had special Halloween items available for players’ avatars.

PortalOne raises $60M as it gears up to launch of its hybrid, immersive gaming platform later this year

Gaming has been one of the most popular entertainment categories in the last two years of pandemic living. Now, a gaming startup that’s building a new kind of platform that it thinks will be a — wait for it — game changer in the category is announcing some funding as to ride that wave of […]