Avenue launched Friday to give operations their own tools to monitor teams, and is building a “command center” for this area of business that is often forgotten, co-founder and CEO Justin Bleuel told TechCrunch.

In addition to the launch the company is announcing $4 million in seed funding, led by Accel, with participation from Flexport and a group of individual investors from companies like Coinbase, Uber, Stripe and Thumbtack.

Bleuel and his co-founder, Jeff Barg, grew up building iOS apps together and then went their separate ways, Bleuel to Uber and Barg to Amazon. While at Uber, Bleuel was working on observability — passive or proactive monitoring — building a lot of the tools in-house to monitor the marketplace for data like rider experience.

Both saw an opening to build these tools themselves for operations teams, and Avenue was born. The technology enables business teams to set up alerts to observe when there is a problem with data, act on it correctly and improve how the overall team functions, think “Datadog or PagerDuty for operations teams,” Bleuel said.

“Data is now all centralized in data warehouses, so you can build on top of them in a way you could not before, like Fivetran, and activate off of it,” he added. “You used to have to build one-to-one alerts for each tool, but now we can actively direct them from the warehouse.” 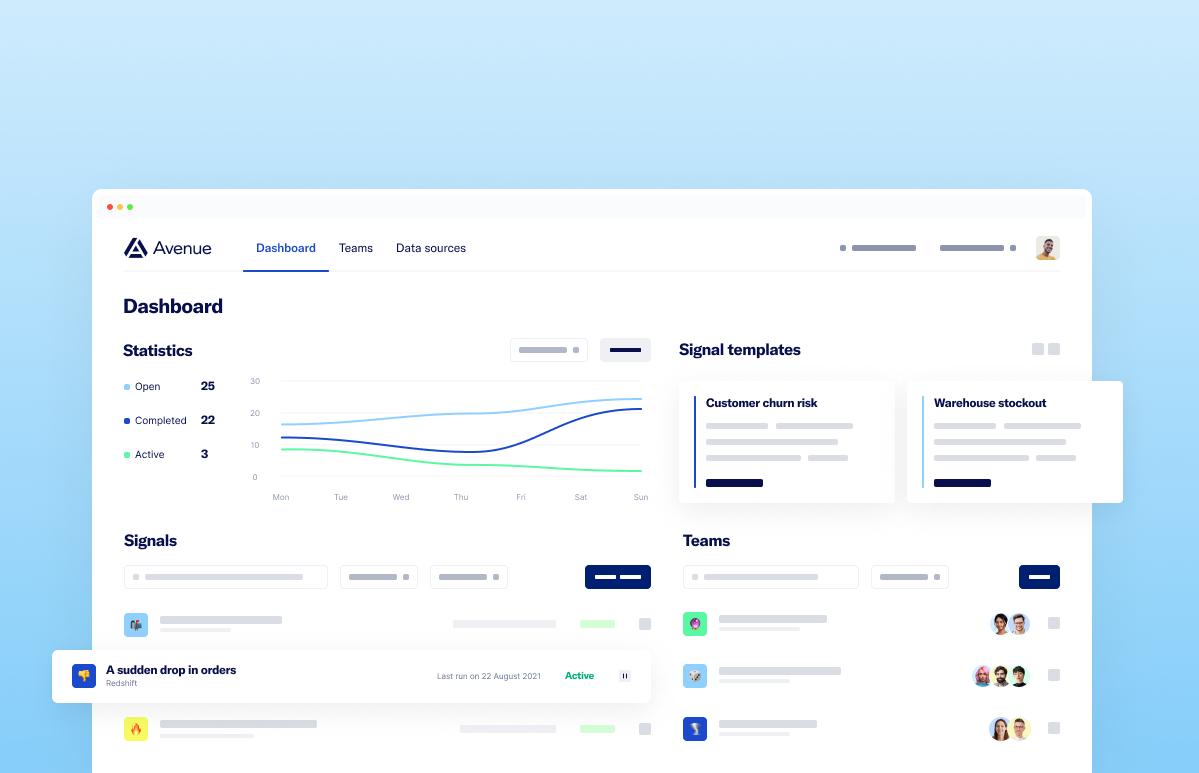 The company, founded in 2020, came out of the Y Combinator winter 2021 cohort, and one of its early customers is food pickup service Snackpass, which is using Avenue to monitor uptime and receive notifications when restaurant partners, for example, have an ordering tablet battery die or lose Wi-Fi. Snackpass is able to contact the location and help them figure out why they went offline. As a result, the company was able to cut the percentage of offline stores in half, Bleuel said.

Avenue’s customer sweet spot is marketplace companies or warehouses for monitoring stock. However, the co-founders are also seeing their technology being used by other companies, like furniture delivery companies, to monitor for reliability or know their inventory levels. Customers are also packaging up reports and sharing them with other internal teams on how to improve operations.

The company intends to use the funding to build on its small team of three, especially in engineering to be able to go to market with new products, Barg said.

Avenue is working with more than 50 companies and since April has sent out over 200,000 alerts. The company’s model bills customers per alert per month, and the team is looking at a freemium model as well as enterprise levels.

Meanwhile, Amit Kumar, partner at Accel, said via email the firm is “very thesis-driven,” one of them being the modern data stack. Accel made early investments into companies like Airbyte, Monte Carlo and Privacer, and saw opportunity for new downstream applications based on the innovation, of which Avenue stood out.

The combination of Bleuel and Barg was “particularly compelling because of their fluency with the problem space” due to their backgrounds at Uber and Amazon and experiencing firsthand how “poorly served” operations teams are and how that can affect the overall business.

He believes the current approach of ops teams in the market today relies heavily on dashboarding, periodic sweeps and color-coded Excel sheets — a process that is “often inaccurate and disorganized.” At the same time, product engineers were flush with well-established tools around observability and incident response.

“Given the rise of ‘atoms’ startups powered by a cohort of ex-Uber and ex-Amazon operators, Justin and Jeff were uniquely positioned to find early design partners and customers among their peer networks,” Kumar added. “As ops teams become both increasingly commonplace and essential to business outcomes, I expect their processes to mature and benefit from similar tooling. This is the thesis behind Avenue, and early traction indicates that next-gen leading ops-heavy companies agree.”

Is overseeing cloud operations the new career path to CEO?