It’s a me, Burt Macklin! Chris Pratt is voice acting as Mario in a feature film that Nintendo is working on with Illumination, the studio that made “Despicable Me.” Also, they didn’t tell us at Nintendo Direct who the new “Smash” fighter is. But we can’t be too disappointed, because apparently Anya Taylor-Joy is Peach, Jack Black is Bowser, Charlie Day is Luigi and recent TechCrunch Disrupt guest (shameless plug) Seth Rogen is Donkey Kong, giving me the representation I always wanted from Nintendo.

Anyway, we’ll have to wait until December 2022 to see whether that’s a flop or a hit, but other recent TechCrunch Disrupt guest Ryan Reynolds absolutely killed it as the titular “Detective Pikachu” in 2019, so let’s go into this with an open mind.

But, in terms of exciting things, we won’t have to wait a long time for… Nintendo unveiled that for the first time since announcing its online subscription Nintendo Switch service in September 2018, it will add a new subscription tier. This tier, called the Nintendo Switch Online+ Expansion membership, will offer access to games from Nintendo 64 and SEGA, like “Super Mario 64,” “Mario Kart 64” (which you can play online with up to four players), “Yoshi’s Story,” “Sonic the Hedgehog 2” and “Castlevania: Bloodlines,” with more to be added over time. Nintendo didn’t say how much this will cost, but it will be available in late October. 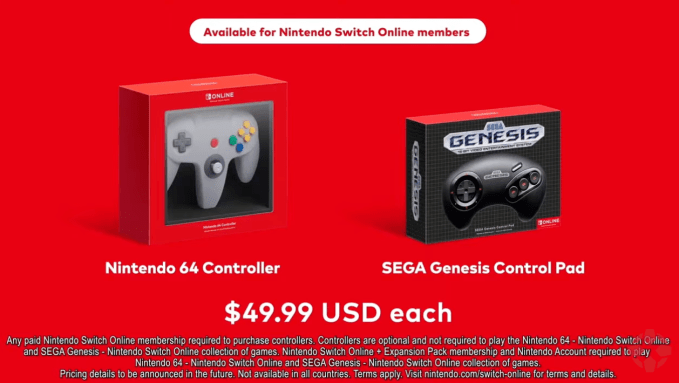 The existing online plan is $19.99 per year. You can buy a wireless Nintendo 64 or SEGA controller for $49.99 each, and while they pull at our nostalgic heartstrings, they’re not required to play.

In other big news, “Kirby and the Forgotten Land,” a new 3D platforming-adventure in the Kirby series, will come to Nintendo Switch in spring 2022. Also, for those of us who haven’t logged into “Animal Crossing: New Horizons” in a while because we’re afraid of our villagers being mad at us, well, I guess we have to get over that. A free update will hit our islands in November, and more details will be revealed in an October edition of Nintendo Direct, focused on “Animal Crossing.” But, today’s livestream teased that players will gain access to the Roost, a café inside of the Museum. This cozy hangout previously appeared in other games, like “Animal Crossing: New Leaf.”