The last few days have been fairly quiet, so far as CES is concerned — no doubt owing to the holiday. The last major dropout came from Microsoft, which confirmed on Christmas Eve it would no longer be traveling to Las Vegas for the event. That news followed similar announcements from GM, Google, Lenovo, Intel, T-Mobile, AT&T, Meta, Twitter, Amazon, TikTok and Pinterest.

A number of big names are still confirmed for next week’s show, including Samsung, LG, BMW, Qualcomm and Sony. As of December 23, the CTA noted that “over 2,200” companies were still planning to attend the show. I will say that, anecdotally, I’ve heard from a number of startups who have opted not to attend, and also plenty who are still planning to be at the show in-person.

Today, some key companies have added their names to the list of the former, including AMD, MSI, OnePlus and Proctor & Gamble. A spokesperson for AMD confirmed the company’s decision in a statement to TechCrunch:

After careful deliberation, AMD has decided to cancel our in-person presence at CES 2022 in Las Vegas and will instead transition to a virtual experience. While the AMD 2022 Product Premiere was always planned as a digital-only livestream, our in-person engagements will now transition to virtual in the best interest of the health and safety of our employees, partners and communities. We look forward to sharing all our exciting news as scheduled on January 4th.

OnePlus was not an official exhibitor at the event, but instead planned to hold an event in Las Vegas to coincide with the big show. The company has since confirmed with TechCrunch that it will no longer be holding an in-person event in Vegas, out of growing concern around the omicron variant.

Gaming firm MSI confirmed via press release that it will not be attending the show. “Since December, the rapidly spreading Omicron variant has brought the USA a surge of COVID-19 cases,” VP Sam Chern said in a statement. “The health and well-being of our employees, customers and fans are our top priority. Hence, we have decided not to participate in-person at CES 2022 and will join the show virtually with our online product launch.” 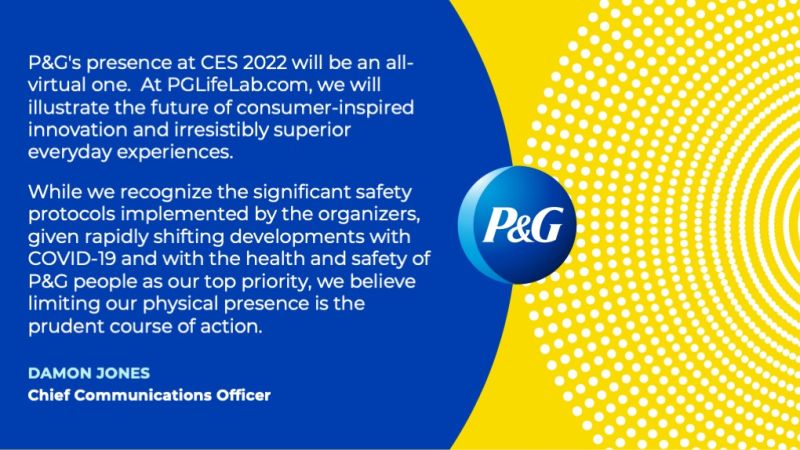 Proctor & Gamble, which has used the event to debut technologies for brands like Gillette and Oral-B, announced its decision in a statement:

Since our planning began for CES 2022, the health and well-being of P&G people and partners has remained our top priority. While we recognize the significant safety protocols implemented by the Consumer Technology Association, given rapidly shifting developments with COVID-19, we’re shifting to an all-virtual experience out of an abundance of caution.

In an op-ed run by the Las Vegas Review-Journal on Christmas Day, CTA head Gary Shapiro pushed back on media coverage of big tech dropouts from the show, which he deemed the “drumbeat of press and other critics who tell the story only through their lens of drama and big name companies.”

With post-pandemic burnout on the rise, the shift to remote working, and the ‘Great Resignation’ now passing into the lexicon, companies are struggling to hold onto talent. Culture platforms like Culture Amp and Glint were built for a different era, offering insights and reports to HR, but many are less tailored to 2022. And employee […]

Subscript develops APIs that grab data from various areas and organizes it so the data is not only easy to find, but provides up-to-date subscription revenue metrics.
« Older Entries