Since the Huracán’s inception in 2014, the company says it has sold 17,500 worldwide, but that won’t be enough to save the V10 engine — no matter how much customers want it. The new Huracán STO, or Super Trofeo Omologata, is the latest super sports car to enter the Lamborghini line up and it simultaneously offers a tiny glimpse of what the future might hold for Lamborghini while exalting the sunsetting of the raucous, visceral, powerful, internal combustion engine.

“The Huracán STO is a celebration of the combustion engine,” Andrea Baldi, the new North American CEO of Lamborghini, told TechCrunch while sitting trackside at Willow Springs Raceway during a press event to test the all-new Huracán STO, a street-to-racetrack super sports car that starts at $327,838 before taxes and delivery.

“The engine isn’t just an engine,” Maurizio Reggiani, the chief technology officer for Lamborghini, tells me later, “it’s music and it’s part of the DNA of the brand.”

That DNA is deeply tethered to striking design, power and what both executives refer to as “emotion” — an abstract idea that embodies the sense of exclusivity and fun that draws the well heeled to Lamborghini.

While I don’t pretend to be an accomplished professional race car driver and only got a handful of lead-follow laps around the tricky, undulating Big Willow track, it’s clear that Lamborghini has harnessed something special in one of the last combustion-engined vehicles it will introduce. (Next time, I want to see how the Huracán STO handles on the road.)

An approachable race car you can street drive

The new Huracán STO takes lessons from Lamborghini’s successful campaigns in single-model racing — the Super Trofeo EVO and GT3 EVO series that take place all around the world — and blends these with “comfort, practicality” and street legality. At its core, the Huracán STO is a reverse-homologated street-legal race car with advanced aerodynamics and materials, sophisticated brakes and telemetry that aims to make its owners faster on the track — while still offering them the option to take a date to dinner in one of the most striking vehicles on the road today.

The Huracán’s massive 5.2-liter, 631 horsepower V10 engine is married to a seven-speed dual-clutch gearbox that makes reaching 140 mph on the straight at Big Willow happen in an eyeblink — and the STO doesn’t even break a sweat since the max speed is 193 mph. Put your foot to the floor and the rear-wheel drive STO takes off even when the ANIMA (Adaptive Network Intelligence Management) setting is in the most mellow street (STO) mode. In this mode, the suspension and dynamics are managed by the Lamborghini Dinamica Veicolo Integrata (LDVI) system to be responsive but more forgiving than in the other modes.

Want a little bit more slide around the corners and faster lap times? Press the ANIMA button again, and you land in Trofeo mode, which changes the torque vectoring (managed by the LDVI) to allow a tad more tail wag. Piaggio mode is reserved for rain, something the desert landscape around Rosemead, California, where Willow Springs is located, hasn’t seen in some time.

The Huracán STO feels approachable on the track — even on the gnarly off-camber, reducing radius, double apex turns around Big Willow. That’s in large part thanks to the advanced aerodynamics of the vehicle, most prominently visible in the added shark fin and giant, manually adjustable wing. That wing at the back can be set into three distinct positions: High, medium and low, which can change the center of gravity by up to 13% and increase the downforce by more than 200 pounds.

Lamborghini has also employed the use of lightweight carbon fiber to both maintain body stiffness and minimize weight. More than 75% of the body of the Huracán STO is made up of carbon fiber, including the Miura-inspired clamshell-style “cofango,” a mash-up of the Italian words for hood and fender, at the front of the car. Under that bonnet sits a tiny storage space, just big enough for your racing helmet or a date’s bag, depending on your driving plans for the day. The STO is nearly 100 pounds lighter than the Performante on which it is partially based thanks to the additional carbon fiber and lighter interior bits.

What’s more important than going very quickly on a race track is the ability to stop very quickly, repeatedly, without any softness in the brakes. The STO gets the first consumer vehicle application of a set of F1-derived, Brembo, carbon-ceramic resin matrix (CCM-R) brakes. This technology helps prevent brake fade during long track stints by keeping them cooler. Added vents at the fenders also push air past the calipers and discs to keep things from getting too heated, as well. Drivers can see brake temperatures in the instrument panel and LDVI helps keep track of brake fade.

Track tech that makes you faster

For those who want to see measurable improvement in their track times, Lamborghini offers a connected telemetry system — much like a VBOX a professional driver would use — that owners can use to record and compare their track times and performance.

The system analyzes everything from brake and throttle input to steering angle to help make owners and drivers faster around their preferred track. The data and video are all uploaded to Lamborghini’s proprietary semi-social network that owners can access on their smartphones through the UNICA app. They can choose to share their track times with other owners, their friends or their coaches. 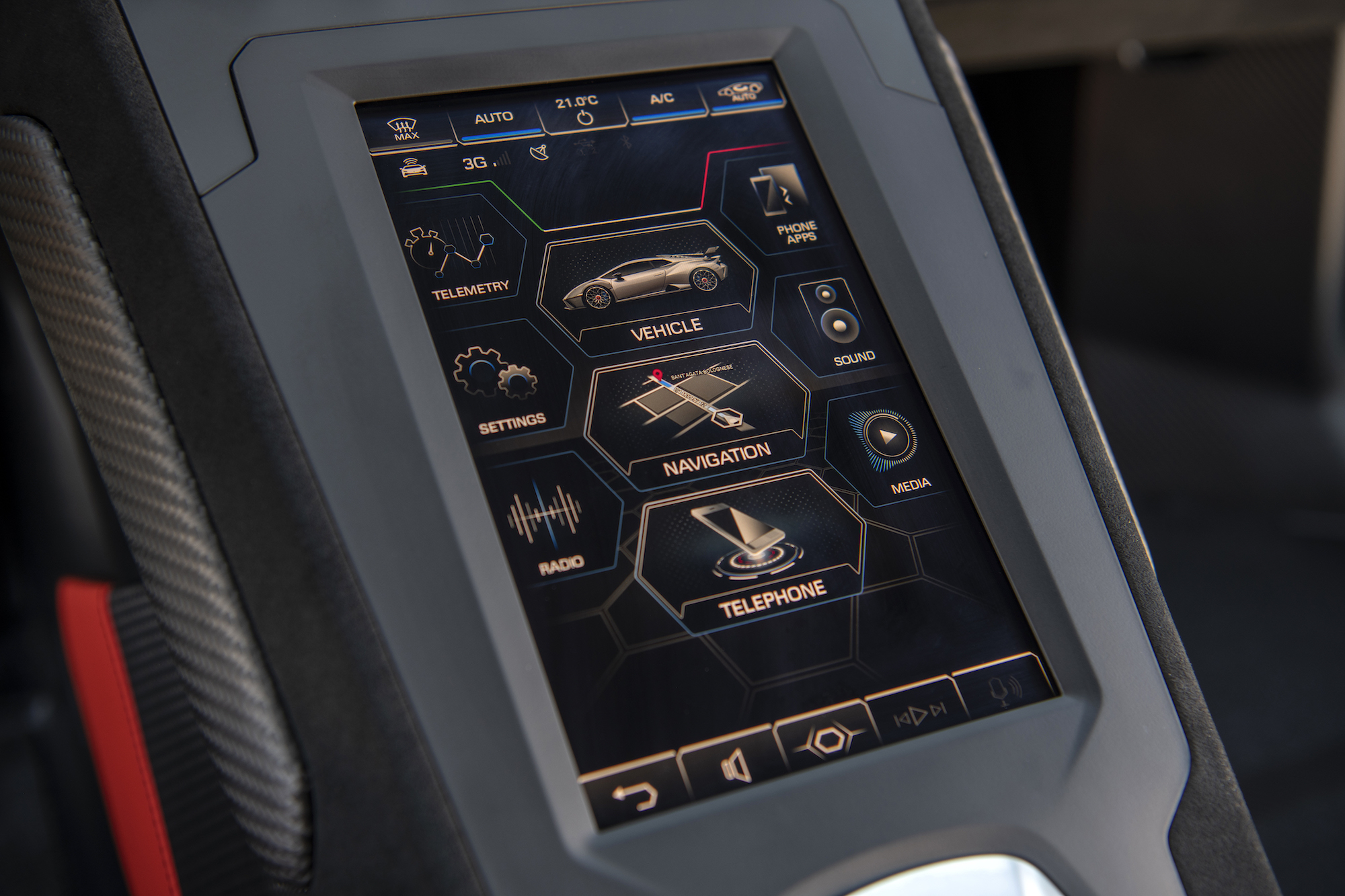 I won’t pretend that I came close to the limits of those brakes or the bespoke Bridgestone Potenza track tires my car had — but I will say that the Huracán STO is one of the most confidence-boosting, communicative and approachable track cars I’ve experienced. Steering is direct and linear, and unlike other Lamborghinis I’ve driven both on and off track, the STO doesn’t get messy or squirrelly as you begin to tiptoe closer to the edge of the vehicle’s capability. At quick speeds its controlled and even refined, a term you might not traditionally associate with a track-oriented Lamborghini.

The good news for those with cash to spend is that Huracán STO production is only limited by what the factory in Sant’Agata Bolognese can produce. Baldi says that’s around 2,500 cars per year, and the Huracán STO is already sold out through next year. “The limit is only in what we can produce. It is limited by the production capacity. By 2024 we’ll be hybridizing the Huracán and the existing ICE versions will be discontinued,” Baldi said.

Lamborghini says that the STO will do 0-60 in under 3 seconds — and while my time following Richard Antinucci, the pro race driver leading me around the track, only consisted of a handful of laps, it’s clear that the STO offers something incredibly special for those with enough cash and aplomb to push the reverse-homologated car to its limits.