India has banned an additional 54 apps — including Tencent’s Xriver, Tencent and Sea-backed Garena’s Free Fire and NetEase’s Onmyoji Arena and Astracraft — with links to China, the latest in a series of similar moves over the past one and half years on ground of national security.

Some of the newly prohibited apps, which include Sweet Selfie HD, Beauty Camera, Viva Video Editor, AppLock and Dual Space Lite, are clones or rebrands of many of the over 300 apps affiliated with Beijing that New Delhi has banned since mid-2020 amid escalating geopolitical tension among the two nations.

India’s Ministry of Electronics and Information Technology made the order, citing the Section 69a of the IT ACT, 2000. In a statement, a Google spokesperson acknowledged the order and said the firm was complying.

“On receipt of the interim order passed under Section 69A of the IT Act, following established process, we have notified the affected developers and have temporarily blocked access to the apps that remained available on the Play Store in India,” a Google spokesperson said Monday. 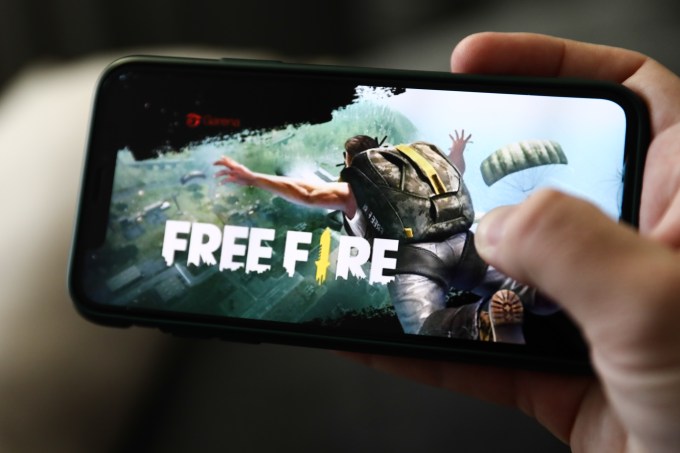 Garena Free Fire logo displayed on a phone screen is seen in this illustration photo taken in Krakow, Poland on January 23, 2022. (Photo by Jakub Porzycki/NurPhoto via Getty Images)

Garena’s Free Fire appears to be the most popular app to be blocked among the latest batch. The Sea and Tencent-backed game had over 40 million monthly active users in India of its 80 million users worldwide, according to analytics firm App Annie, data of which an industry executive shared with TechCrunch. (Sea is quietly testing its social commerce Shopee in India.)

The series of blocking began in late June 2020 when India banned TikTok, Alibaba’s UC Browser and Tencent’s WeChat and dozens of other apps with links to China over national security concerns. New Delhi, which has never explicitly mentioned China in these announcements, did not offer an official statement on its move Monday.

The Indian government has since extended the ban to over 200 more apps including popular title PUBG. That game remains the only known app that has made a return to Google Play Store and Apple’s AppStore in India in some way.

Several of other firms and app operators have attempted to address New Delhi’s concerns, but the Indian government retained its decision early last year after deeming the responses inadequate.

India is by far the largest market globally by app installs. Last year, the South Asian nation clocked over 25 billion downloads, according to App Annie.

US giants as well as firms from other nations including China and South Korea aggressively focused on India in the past decade as they looked for the next great growth region. In comparison, only a handful of Indian firms operate in China.

After India refused to revoke its ban on TikTok, ByteDance (the app’s parent firm) laid off the vast majority of its employee base in India and recently shut down its edtech business in the country, TechCrunch reported.

TikTok’s ban in India, which prompted several local startups to launch short video apps, gain traction and raise over $1 billion, did not make much impact on ByteDance’s revenue as the firm gained grounds in several other overseas markets. Indian social network ShareChat and on-demand streaming service MX Player said last week they were merging their short-video apps in the country in what TechCrunch reported is a $900 million deal.