HBO Max app just had one of its best quarters to date, but app performance still has room to improve

Sensor Tower’s “Q1 2022: Store Intelligence Data Digest” report saw HBO Max as a top contender for the most downloaded apps in the U.S. Not only did the app make the top five list, but it also had the second-best month overall in the month of January.

In addition, HBO Max had the best quarter on the U.S. App Store for any SVOD (subscription video on demand) app since Disney+ launched in late 2019, passing Netflix for only the second time.

In recent years, there has been a continuous rise in video streaming downloads as more consumers value watching content on the go. The top six apps had more than 10% U.S. download market share in Q1 2022, with HBO Max in the lead (21%), Disney+ (17%), and Netflix (15%). Meanwhile, Peacock, Hulu, and Amazon Prime Video had at least 10%. 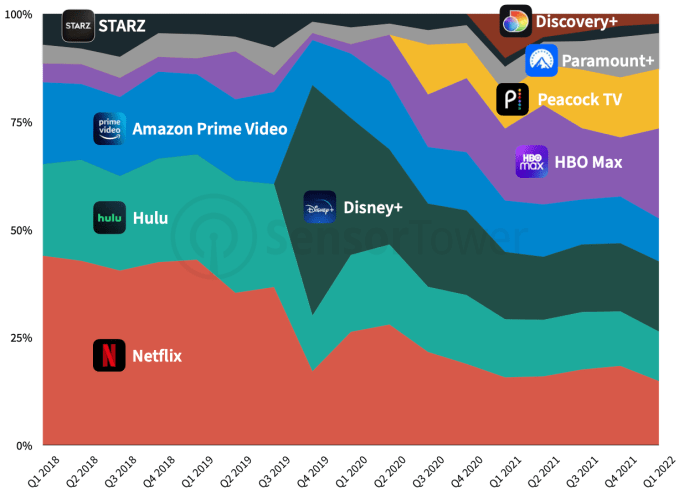 While Netflix, Hulu, and Amazon Prime Video were the top three video streaming apps in the U.S. from Q1 2018 through Q3 2019, with 80% of combined downloads, by Q1 2022, the three streaming apps combined for only 37% of downloads.

All in all, improved content offerings have resulted in a sustained upward trend in monthly users. In Q1 2022, events such as HBO Max’s season two of “Euphoria,” along with major U.S. sporting events such as the Super Bowl (Peacock TV) and March Madness (Paramount+) all contributed to a boost in adoption, giving these streaming services a competitive edge. 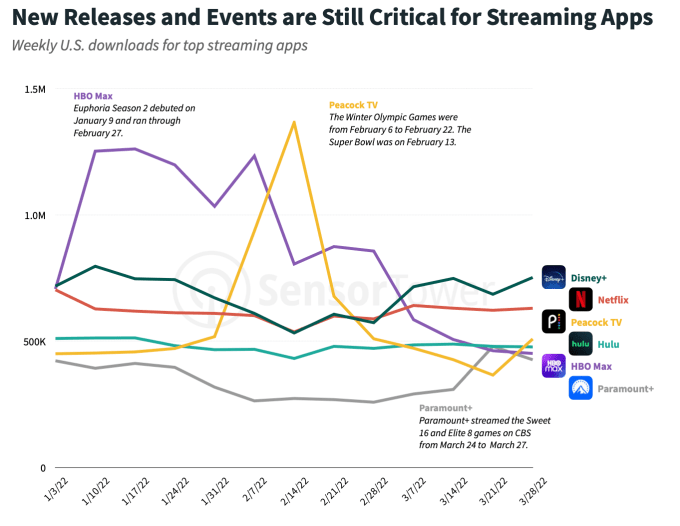 The Flaws of HBO Max’s App Platform & Plans for Improvement

More and more consumers are turning to their mobile devices to stream their content, so it’s no surprise that HBO Max’s app got the attention of subscribers. However, users are frustrated with the platform and have complained for years about its performance. If the user interface is flawed, no amount of valuable content is worth dealing with outages and errors.

On the App Store, the app has a 2.8 rating, with many reviewers complaining that the app is “super buggy,” slow, and poorly designed. Google Play users were a little nicer, giving the app a 3.7. However, most still complained about an “unfriendly” interface and constant buffering.

HBO Max is notorious for having unstable app performance. Its platform overall has had many issues, and not only were their outages last year in June and December, but there have also been crashes like the finale of “Mare of Easttown,” and more recently, “Euphoria” season two, and “The Batman” were both down.

Sarah Lyons, head of HBO Max’s Product Experience, told Protocol that at launch, the company willingly released an imperfect app because the team figured it could get a facelift once the app garnered more success. “We’ve been changing out the engine of the plane while we’re flying the plane,” she said.

The original app was based on the old HBO Go and HBO Now mobile and TV apps. HBO Go was only meant for cable subscribers, so it lacked a strong discovery function like its competitors, Netflix and Disney+.

Earlier this month, WarnerMedia finally got around to fixing its Apple TV app and promised it would be rolling out upgrades such as enhanced stability, a more simplified sign-in process, and other new features. It previously improved the app experience for Roku, PlayStation, Android TV, LG, and Vizio. The desktop version also got a new shuffle button in March.

According to Lyons, crashes of the HBO Max Roku app have decreased by 90%, and load times on Android TV decreased by 50%. She also told Protocol that Fire TV and Xbox apps would also be improved after the relaunches of the mobile and web experience. The platform will get a decent makeover as the team plans to improve in-app discovery, among other changes.

Warner Bros. Discovery now has plans to merge the two streaming services, HBO Max and Discovery+, into a single app. While Discovery+ has a lower U.S. download market share than HBO Max in Q1 2022, its app rankings on the App Store and Google Play are significantly higher at 4.9 and 4.7, respectively. While this obviously isn’t an overall comparison, since reviews and rankings are only from a low number of users (less than one million), it is something to note.