When two of Indonesia’s biggest companies — ride-hailing company Gojek and e-commerce marketplace Tokopedia — joined forces as GoTo Group last month, a key highlight from the merger was that the last-mile delivery space is still a huge global trend.

In Nigeria, the e-commerce and last-mile delivery market is projected to be worth over $20 billion in the next five years. Big players like Jumia have considerable market share yet smaller platforms are increasingly carving out theirs. One of such is ride-hailing-turned-logistics company Gokada.

Gokada launched in 2018 as a ride-hailing company in Lagos, Nigeria. But in 2020, Gokada began offering logistics (Gsend) and food delivery services (GShop) after a ride-hailing ban by the Lagos State government affected its operations. Today, the company is combining all these services (which have operated independently in the past) into a single application.

“In September and October, we launched GShop which is the food delivery platform for Gokada. What we realized from our customers was that while they were using the Gsend and GShop separately, they came to us asking if we could put them together,” said Gokada CEO Nikhil Goel to TechCrunch. “So doing this is more like a transition from other things we were doing and making it easier for our customers to have all our services in one platform and create a super app.”

Gokada’s super app plans are coming off the back of an impressive year for the company despite a troubling first few months during the pandemic. As early as February, the company downsized and laid off more than half its staff after the ban on motorcycles in Lagos. It quickly pivoted to logistics and food delivery and hasn’t looked back.

This past year, Gokada has crossed over $100 million in annualized transaction value. It has also helped more than 30,000 merchants on its platform to execute over 1 million food delivery and e-commerce orders.

“Before Gokada ventured into ride-hailing in Lagos, people questioned us. When we entered the delivery space, it was the same question people asked. They said we didn’t have the experience. But today, if you look at it critically, we’ve changed this market in a different manner,” Goel said.

Goel, who took over the reins at Gokada this March after founder Fahim Saleh tragically passed on, has been instrumental to the company’s impressive growth so far. Per information shared by Gokada, the company’s volume growth has increased 3x in the last six months while revenue increased 10x within the past year. 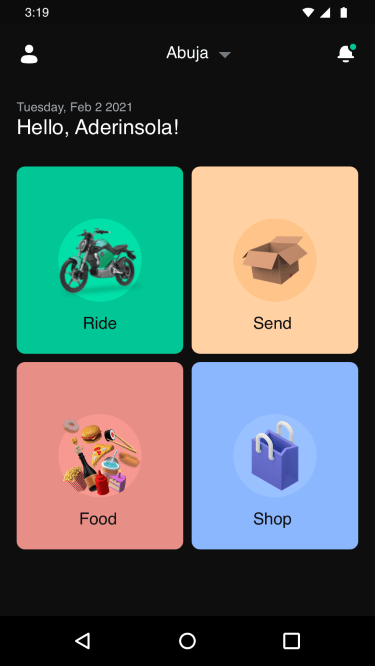 Before becoming CEO, Goel had three roles since joining the company in 2019 — VP of Rides, COO, and acting president. Previously, he also co-founded Indian edtech startup Classplus and worked as a general manager at Indian food delivery giant Zomato. His stint at Zomato and knowledge of the food-delivery and logistics space will be key to how Gokada pulls off its super app ambitions.

Although Gokada is only present in Lagos, the company is looking to launch its services across other cities including Abuja, Port Harcourt, Ibadan and Ogun. And not only will the super app allow Gokada customers in these cities to access food delivery, e-commerce (medicines and groceries among other supplies), and logistics, but they will be able to use ride-hailing services.

The company plans to start with neighbouring markets to Lagos — Ogun and Ibadan. In the latter, there’s already a ride-hailing platform in the form of SafeBoda. The company, which is present in Uganda and Nigeria, employs a super app model in the East African country but offers only ride-hailing services in Ibadan, the only Nigerian city where it operates.

For much of last year, SafeBoda has enjoyed dominance in the southwestern city but Gokada’s arrival, especially as it plans to offer other services, might threaten its commanding position.

“We started with its ride-hailing service in Lagos. We were mostly known as one of the pioneers of ride-hailing in Lagos before the ban. So far, we’ve not ventured outside Lagos, and the reason for that has been that we wanted to remain focused on our new business here. And it’s evident that when you move across Lagos, you will see our delivery bikes everywhere on the road. But ride-hailing will always stay with us wherever we go outside the city,” the CEO added. Gokada is in talks to secure operational licenses for ride-hailing but has already acquired a NIPOST licence to mitigate future risks on the regulatory front and allow them to operate courier logistics services across the country.

While services in a super app can differ from one platform to another, payments is the defining functionality that ties those offerings together. For now, Gokada only provides a subset of that which is a wallet feature and a debit card option to pay for these services. On why this is the case, Goel said: “Before many of these companies like Grab and Gojek got into payments, they were providing other services. The idea for a super app is to provide customers with different services under one umbrella to ease their lives. That’s what we’re doing but we’re open to a payments play in the future.”

Unlike other markets in Asia, Africa doesn’t have clear leaders in the super app race. Therefore, Gokada will join a growing list of platforms clamouring for supremacy in their respective markets, a spot OPay seemed to be gunning for before shutting down its non-fintech verticals last year to focus on its payment services.