In 2013, eight tech companies were accused of funneling their users’ data to the U.S. National Security Agency under the so-called PRISM program, according to highly classified government documents leaked by NSA whistleblower Edward Snowden. Six months later, the tech companies formed a coalition under the name Reform Government Surveillance, which as the name would suggest was to lobby lawmakers for reforms to government surveillance laws.

The idea was simple enough: to call on lawmakers to limit surveillance to targeted threats rather than conduct a dragnet collection of Americans’ private data, provide greater oversight and allow companies to be more transparent about the kinds of secret orders for user data that they receive.

Apple, Facebook, Google, LinkedIn, Microsoft, Twitter, Yahoo and AOL (to later become Verizon Media, which owns TechCrunch — for now) were the founding members of Reform Government Surveillance, or RGS, and over the years added Amazon, Dropbox, Evernote, Snap and Zoom as members.

But then sometime in June 2019, Evernote quietly disappeared from the RGS website without warning. What’s even more strange is that nobody noticed for two years, not even Evernote.

“We hadn’t realized our logo had been removed from the Reform Government Surveillance website,” said an Evernote spokesperson, when reached for comment by TechCrunch. “We are still members.”

Evernote joined the coalition in October 2014, a year and a half after PRISM first came to public light, even though the company was never named in the leaked Snowden documents. Still, Evernote was a powerful ally to have onboard, and showed RGS that its support for reforming government surveillance laws was gaining traction outside of the companies named in the leaked NSA files. Evernote cites its membership of RGS in its most recent transparency report and that it supports efforts to “reform practices and laws regulating government surveillance of individuals and access to their information” — which makes its disappearance from the RGS website all the more bizarre.

TechCrunch also asked the other companies in the RGS coalition if they knew why Evernote was removed and all either didn’t respond, wouldn’t comment or had no idea. A spokesperson for one of the RGS companies said they weren’t all that surprised since companies “drop in and out of trade associations.” 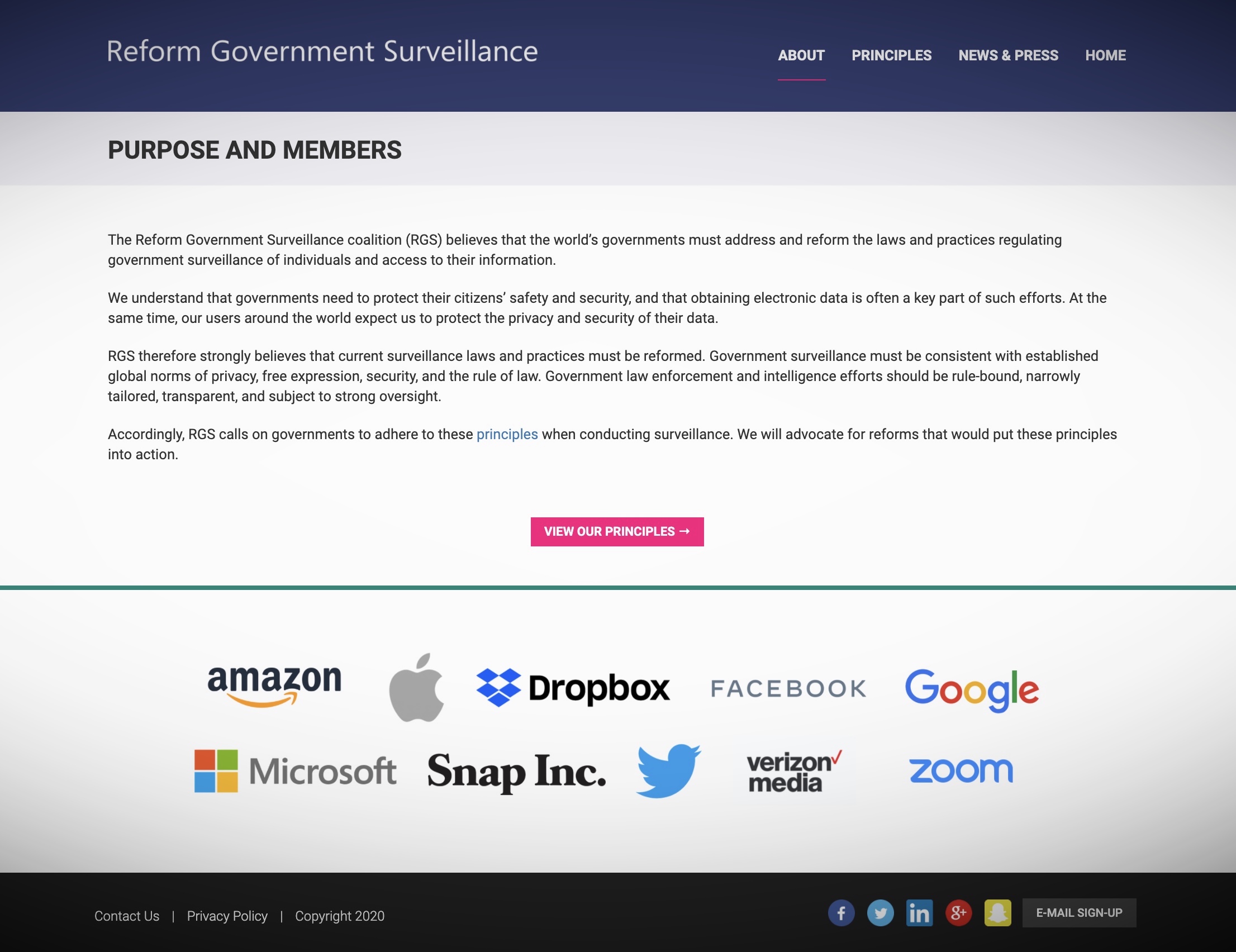 The website of the Reform Government Surveillance coalition, which features Amazon, Apple, Dropbox, Facebook, Google, Microsoft, Snap, Twitter, Verizon Media and Zoom, but not Evernote, which is also a member. Image Credits: TechCrunch

While that may be true — companies often sign on to lobbying efforts that ultimately help their businesses; government surveillance is one of those rare thorny issues that got some of the biggest names in Silicon Valley rallying behind the cause. After all, few tech companies have openly and actively advocated for an increase in government surveillance of their users, since it’s the users themselves who are asking for more privacy baked into the services they use.

In the end, the reason for Evernote’s removal seems remarkably benign.

“Evernote has been a longtime member — but they were less active over the last couple of years, so we removed them from the website,” said an email from Monument Advocacy, a Washington, D.C. lobbying firm that represents RGS. “Your inquiry has helped to prompt new conversations between our organizations and we’re looking forward to working together more in the future.”

Monument has been involved with RGS since near the beginning after it was hired by the RGS coalition of companies to lobby for changes to surveillance laws in Congress. Monument has spent $2.2 million in lobbying to date since it began work with RGS in 2014, according to OpenSecrets, specifically on lobbying lawmakers to push for changes to bills under congressional consideration, such as changes to the Patriot Act and the Foreign Intelligence Surveillance Act, or FISA, albeit with mixed success. RGS supported the USA Freedom Act, a bill designed to curtail some of the NSA’s collection under the Patriot Act, but was unsuccessful in its opposition to the reauthorization of Section 702 of FISA, the powers that allow the NSA to collect intelligence on foreigners living outside the United States, which was reauthorized for six years in 2018.

RGS has been largely quiet for the past year — issuing just one statement on the importance of transatlantic data flows, the most recent hot-button issue to concern tech companies, fearing that anything other than the legal status quo could see vast swaths of their users in Europe cut off from their services.

“RGS companies are committed to protecting the privacy of those who use our services, and to safeguard personal data,” said the statement, which included the logos of Amazon, Apple, Dropbox, Facebook, Google, Microsoft, Snap, Twitter, Verizon Media and Zoom, but not Evernote.

In a coalition that’s only as strong as its members, the decision to remove Evernote from the website while it’s still a member hardly sends a resounding message of collective corporate unity — which these days isn’t something Big Tech can find much of.