Tesla CEO Elon Musk said Thursday night the company plans to roll out this year its ‘full self-driving’ beta software to all customers in North America who have plunked down as much as $12,000 for the controversial version of its driver assistance system.

The chief executive made the announcement while donning a black cowboy hat during the Tesla Cyber Rodeo, an event to celebrate the grand opening of its factory in Austin.

“The Tesla Autopilot team and AI team has done an incredible job building real world AI and we’re able to go to wide beta for all full self driving customers in North America this year,” Musk said during a speech that was live streamed.

Full Self Driving, or FSD as it is often branded, has been available as an option for years. However, Tesla vehicles are not self-driving. Tesla vehicles come standard with a driver assistance system branded as Autopilot. For an additional $12,000, owners can buy FSD – a feature that Musk has repeatedly promised will one day deliver full autonomous driving capabilities. FSD includes the parking feature Summon as well as Navigate on Autopilot, an active guidance system that navigates a car from a highway on-ramp to off-ramp, including interchanges and making lane changes. It is now operational on city streets.

Tesla has released FSD to some, but not all, of the customers who have paid for the product. The company launched a “safety score” tool last year to determine whether owners can access the beta version of its “Full Self-Driving” software. Tesla said in its Q4 shareholder letter, that 60,000 Tesla owners had gained access to the FSD beta software.

Numerous videos have been posted since FSD beta software was first released, showing owners either pushing the boundaries of the system’s capabilities or in many cases highlighting the software’s limitations, including making sudden turns, attempting to drive the wrong way on roads or turn towards pedestrians. 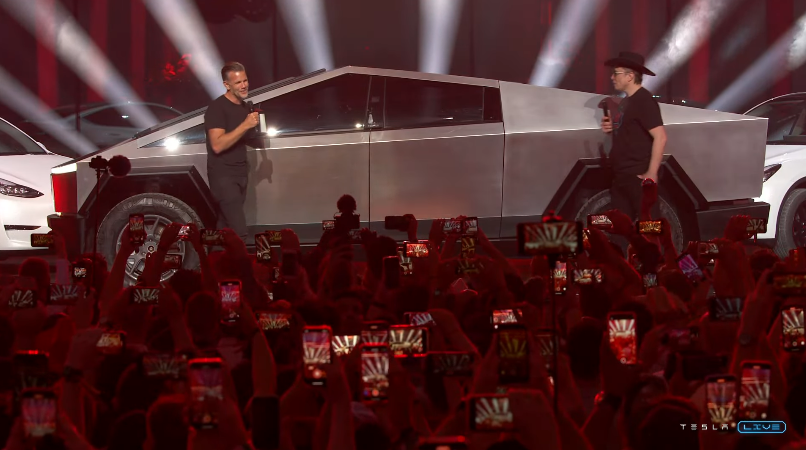 Aside from one sentence uttered by the executive when he could get a word in edge-wise, what with so many adoring fans screaming their heads off and even crying, Musk said no more about this FSD rollout. Nor did he share many tangible updates at all, only hinting that next year would be the year for “some cool stuff that we haven’t even talked about yet.”

He did share a few stats about the new factory, however.

The mile-long, $1.1 billion plant, Tesla’s sixth gigafactory and the company’s new global headquarters, will produce not only Model Ys, which are currently Tesla’s most popular vehicle, but also, starting in 2023, the Semi, the Roadster and the highly anticipated Cybertruck. It will also produce 4680 battery cells.

“This year is all about scaling up, and then next year, there’s gonna be a massive wave of of new products,” said Musk.

New products like a “dedicated robotaxi” that’s going to look “quite futuristic,” and the first version of the Tesla humanoid robot, Optimus, the concept for which was unveiled last year.

“Optimus will obviate what an economy even means,” said Musk. “It’ll be able to do basically anything that humans don’t want to do, Optimus will do. It’s going to be an age of abundance…it’s really going to transform the world, I think, to a degree even greater than the cars.”

Musk did not say whether Optimus will be produced at the giga Texas factory, which Musk referred to as “the most advanced car factory that Earth has ever seen.”

The Austin factory differs from Tesla’s other five factories because everything needed to produce a vehicle is under one roof, said Musk.

“The thing that we thought makes sense is to really think of it like a chip, like an integrated circuit,” said Musk. “Combine everything together in one package. This is a case of raw materials come in one side, they get formed into a cell, they get formed into a pack. Then we cast the front rear body. The pack itself is structural. And then out comes a finished product. So it’s raw materials in one side, cars out the other side.”

This building design will help Tesla move to “truly massive scale,” part of Musk’s plan to grow the company to “extreme size.”

Many thought Musk would reveal updates to the Cybertruck at the event, and some on social media reported seeing the rear glass drop to help carry cargo, updated side repeater cameras in the front fenders and a mid guard to separate the bed and passenger seats, but the executive didn’t mention those. The only “update” Musk mentioned on stage was that the Cybertruck would have no door handles, because “the car can tell that you’re there and it just knows it needs to open.”

Musk closed his short speech at the Cyber Rodeo saying, “Here at Tesla, we believe in throwing great parties, so let’s get this party started.”

‘Literally, the biggest party on Earth’

Before Musk drove onstage in a 2008 Roadster to the accompanying beats of “Still D.R.E.” the YouTube livestream and a scan of social media demonstrated some of the delights to be found at the party, where guests were reportedly welcomed with a self-guided tour of the Model Y production line.

Photos of the event shared on social media show that Tesla has really embraced the Texas spirit in a way that moves beyond not paying a corporate tax rate – Texas-style art and entertainment in the form of a giant metal ten-gallon hat, a mechanical bull and 87 red, white and blue Teslas in the shape of the Texas flag were on display.

In the minutes before Musk addressed the crowd, a rather impressive drone show took over the skies, displaying the Cyber Rodeo iconography in the sky one minute, a Cybertruck-shaped array of lights the next, a Shiba Inu for all the Dogecoin stans and an image of the executive himself in a cowboy hat, looming in the sky like the Dark Mark.

Not all who wanted to be at the Cyber Rodeo could attend unfortunately.

Musk tweeted on Wednesday that the door to the event “won’t be super strict,” leading many a fanboy to trying to line up and make it inside. Unfortunately, the poor souls have been consistently turned away from security who say that without an invitation, no one is making it inside.