If software is eating the world, AI isn’t far behind. AI-powered text-, art- and audio-generating systems will soon make — and already are making — their way into the tools people use every day, from programming environments and spellcheck plugins to concept art creation platforms. The video game industry is no exception to this, and that hardly comes as a surprise. As illustrated by games like AI Dungeon, AI — while imperfect — can inject surprising creativity and novelty into branching narrative storytelling.

Inworld AI was founded on this premise. The brainchild of Ilya Gelfenbeyn, Michael Ermolenko and Kylan Gibbs, the startup’s AI-powered service generates virtual characters primarily for games, but also in broader entertainment and marketing campaigns. Using tools and tie-ins with engines like Unreal Engine and Unity, Inworld promises customers that they can create non-playable characters (NPCs) and digital representatives with the appearance of memories, personalities and human-like behaviors.

Demonstrating that there’s demand, Inworld today closed a $50 million Series A round led by a diverse array of investors including Intel Capital and Section 32 (both of which co-led the round), Founders Fund, Kleiner Perkins, CRV, Microsoft’s M12, Micron Ventures, LG Technology Ventures, SK Telecom Venture Capital and NTT Docomo Ventures. The new cash brings the company’s total capital raised to $70 million, which Gelfenbeyn — Inworld’s CEO — said will be put toward product development, research and hiring. 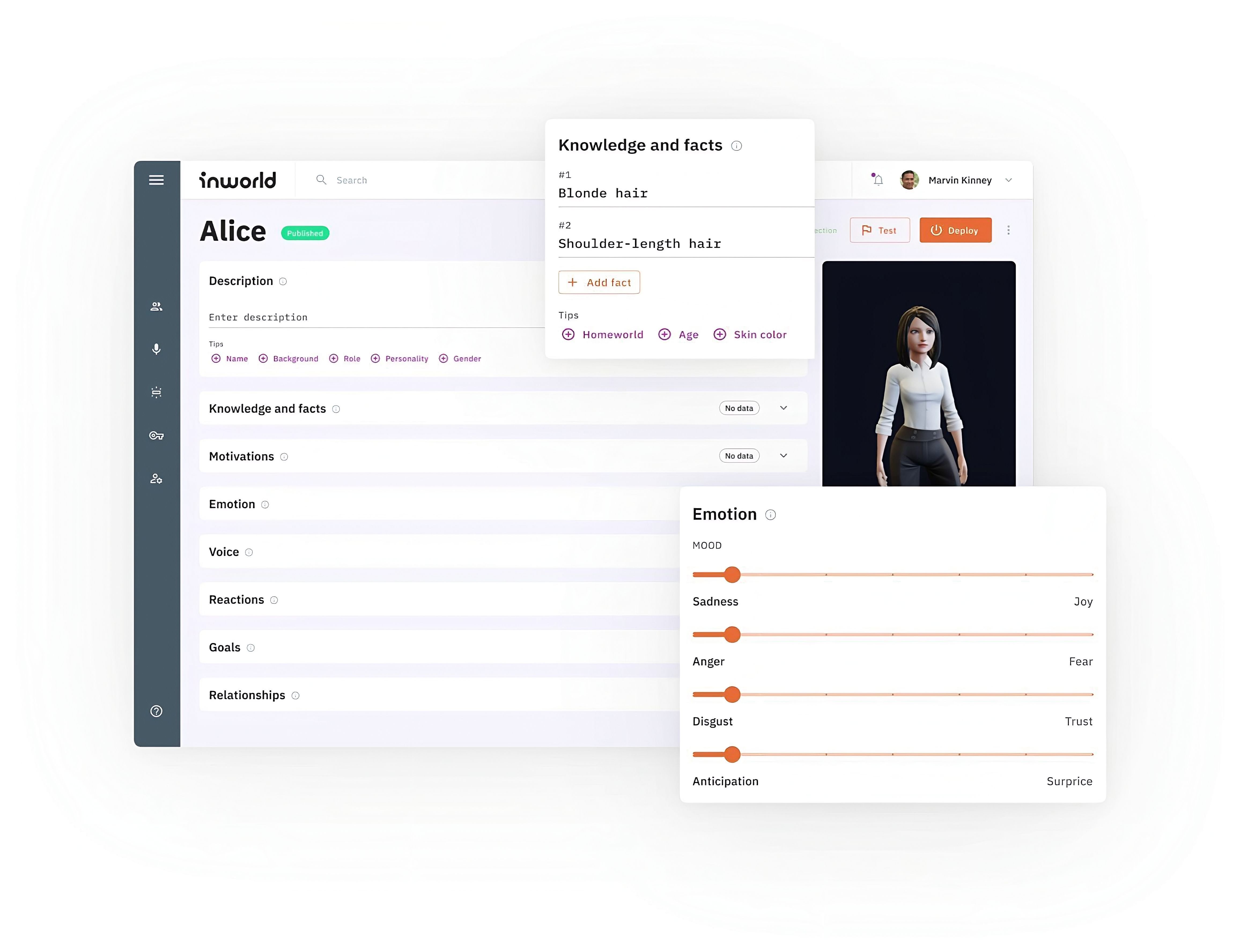 Inworld’s certainly been busy. Since closing its seed financing round in March, the company released its first product and was selected as one of six companies to join the 2022 Disney Accelerator, Disney’s startup incubator. Inworld also made a notable hire, bringing on John Gaeta, perhaps best known for the “bullet time” effect in the Matrix film franchise, as its chief creative officer.

“It’s an incredible opportunity to talk to innovators across the entire Disney company, and discuss how AI-driven characters are the next generation of storytelling,” Gelfenbeyn said of the Disney Accelerator. “Inworld has broad applications outside of gaming and metaverse, and can also be used for entertainment, sales and marketing, and training and education … It’s too early to share numbers, but we’re looking for partners who want to build the future of immersive reality.”

Gelfenbeyn drew on a long history in conversational AI in ideating Inworld, which officially launched in 2021. (“Conversational AI” refers to AI that enables people to interact with apps the way they would with other humans, for example via chatbots.) Formerly the CEO of API.ai, a natural language startup that once offered voice assistant software for Android, Ermolenko joined Google following its acquisition of API.ai and its intellectual property. He led product development at Dialogflow, the Google Cloud platform for creating conversational apps, before founding the Google Assistant Investments program, which worked with startups broadening Google Assistant features.

Ermolenko was the VP of R&D at API.ai and then an engineering manager at Dialogflow. Gibbs came from Bain, where he was a consultant, and DeepMind, where he led product efforts for conversational and generative AI (think systems like OpenAI’s text-generating GPT-3).

Inworld provides a platform for creating AI-powered virtual characters, allowing users to build characters by describing the said characters in natural language. To steal an example from my colleague Devin Coldewey, who covered Inworld in April, a description might read: “Asha is a weaponsmith and merchant in the town of Rolheim. She comes from the far north, where her family is.”

When crafting a character’s “brain,” customers use Inworld to tailor elements of their behavior and even cognition, such as their goals and motivations, manners of speech, knowledge and voice. Editable text fields inform the character of, for example, common knowledge like the geography of a game world and the character’s tendency toward sadness, politeness and so on. 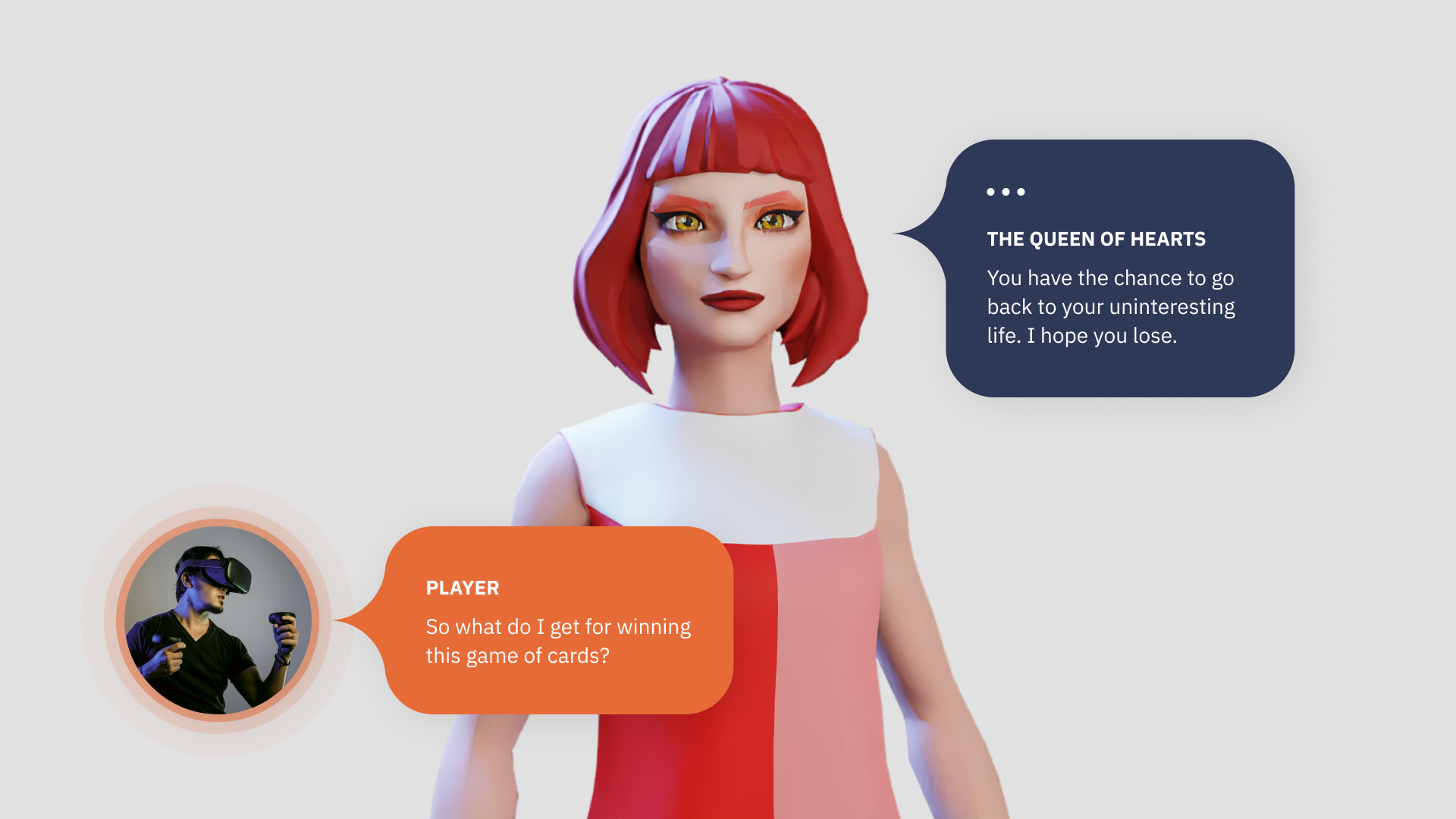 Inworld-generated characters undergo a “training” process before they’re ready to interact and test, optionally in virtual reality via Inworld’s Oculus companion app. The characters can then be integrated into games and apps via packages for common engines or an API.

Characters built with Inworld query the company’s cloud-hosted system for new dialogue. Pricing hasn’t been decided yet, but presumably, it’ll be a per-query charge — a model that might not be feasible for all creators, although Gelfenbeyn says Inworld is investigating ways to reduce service costs.

Tools allow creators to blacklist words and particular topics and switch on safety filters as well as implement dialogue fallbacks in case of connectivity problems. Inworld claims to be one of the first companies to use the Moderation endpoint from OpenAI, a tool that analyzes text to see if it contains anything that out to be filtered out, including hateful or violent speech, sexual content and messages that promote self-harm.

Just how successful these tools are at keeping characters on topic remains to be seen — chatbots like Meta’s problematic BlenderBot 3.0 don’t instill a lot of confidence in text-generating AI, and Inworld’s platform is in limited beta. But as the company expands its workforce of 42 employees and ramps up customer acquisition, it might not be long before Inworld-powered characters make their way into high-profile games. It’s then when the real stress-testing will begin.

“There is a healthy ecosystem of innovation in virtual characters, from companies that focus on visuals, avatars, hardware, motion and more. Inworld is focused on the characters’ personalities or minds, so we’re focused on building a product that is compatible with all of these systems. We’re avatar- and platform- agnostic, and looking forward to collaborating with many of these players,” Gelfenbeyn continued. “Characters have distinctive personalities, and we’re focused on making those personalities more lifelike, engaging and expressive. Our mission is to create and inspire new meaningful relationships and we believe these elements of personality will help us achieve that.”