Spanish ride-hailing unicorn Cabify is getting into grocery deliveries as it looks to add another string to its multi-modal mobility and urban utility bow.

It announced the addition of a ‘Super’ option in its app today — which is available for users in nine cities in its home market, namely: A Coruña, Alicante, Barcelona, Madrid, Malaga, Murcia, Seville, Valencia and Zaragoza.

The grocery delivery service is powered by a partnership with local grocery picking startup, Lola Market. But there’s an added twist here because the latter was acquired by Spain’s on-demand delivery platform giant, Glovo, last month — as part of its efforts to expand a speedy urban grocery delivery business. So it’s been a busy few months (of being in demand) for the smaller Spanish startup.

The relationship between Cabify and Glovo (via Lola Market) looks to be only at the level of a strategic partnership for now.

And while Cabify is touting the new ‘Super’ offering as the first time its users will be able to grocery shop via its app, the service (including delivery) is being fulfilled by Lola Market. So it’s a purely technical integration — and looks like a play to cross-sell the ride-hailing platform’s users on the convenience of push-button, app-based supermarket shopping too.

Madrid-based Lola Market, meanwhile, deliveries groceries from Spanish supermarket chains including Makro, Lidl, Carrefour, Mercadona, DIA, Alcampo, as well as saying it can do picking from traditional markets and some specialised shops. 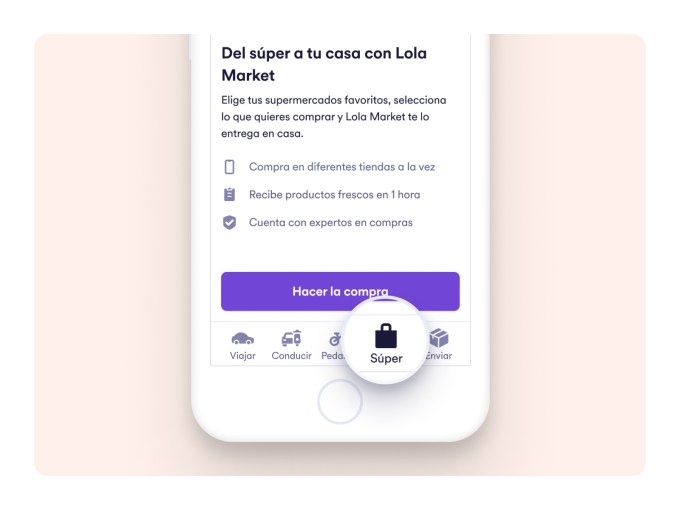 This summer Cabify rolled out a pilot multimodal subscription offering in Madrid — seeking to nudge users towards subscription plans that make use of its different mobility offerings — ride-hailing, its electric micromobility subsidiary MOVO, bike subscription service Bive and courier service.

With the new grocery tie-up it’s billing the move as a further expansion of this multi-modality strategy — and trying to claim green credentials, by suggesting it will reduce trips in private cars and help improve the urban environment by reducing emissions through grouped deliveries.

Though of course ride-hailing can negatively impact cities by clogging roads and causing congestion that can degrade the quality of public transport services and other emissions-free mobility options (e.g. biking and walking), as well as worsening air quality (even electric cars can produce pollution by generating particulate matter, such as from wear to car tyres).

Ride-hailing services also took a knock during the pandemic — while grocery deliveries surged during lockdowns. So diversification looks sensible.

“This new service expands the concept of what we know as ‘multi-mobility’,” said Lucía Chávarri, VP of new business at Cabify in a statement. “With the ‘Super’ service, thanks to the collaboration with Lola Market, we avoid trips to supermarkets in private cars, which are often occupied by only one person, and which are very common in cities. “In addition, online shopping improves the efficiency of available resources, because delivery allows different orders to be grouped together and delivered following the best route.”

Luis Pérez del Val, the founder and CEO of Lola Market, suggested the “collaboration” with Cabify will allow it to reach many more users and “take advantage of our infrastructure, making the service accessible to many more people in major cities”.

“With this integration we will be able to further optimise the efforts of our Personal Shoppers,” he also said, sketching the use-case of a Cabify user getting picked up at the airport and on the way to their destination having time to buy their groceries in the app and receive them when they arrive home.

“The possibility of shopping in 1 hour or at the scheduled time is a huge opportunity for this collaboration,” he added.

Cabify also operates its ride-hailing platform in a number of cities in Latin America. We’ve asked if it has any plans to add grocery deliveries for users in that region.

More broadly, the lines between different on-demand city-based ‘convenience’ services continue to blur in Europe and the Americas as different platform giants jockey for position and profitability — chasing the dream of a China-style ‘super app’.