Tenderly, a startup that aims to make it easier for web3 developers “of all skill sets” to build blockchain products, has raised $40 million in a Series B round of funding – just months after closing on its Series A.

The financing is yet another example of the rapid succession of funding rounds in the blockchain infrastructure space – and fintech space in general. Earlier this month, TechCrunch also reported on Alchemy raising a $200 million extension to its Series C at a valuation of $10.2 billion. That company aims to be the starting place for developers considering building a product on top of a blockchain or mainstream blockchain applications.

While both are similar developer tools for building decentralized applications, the main difference between the two companies is that Alchemy provides node as a service while Tenderly is a platform designed to develop, test and monitor the health of decentralized applications with its dashboard and API, the company maintains. It is says that it is more focused on smart contracts.

“Tens of thousands” of developers from apps such as Uniswap, Yearn Finance, Circle , Chainlink, Knossos, Nexus Mutual, Instadapp DeFi Saver and NFT marketplace (and decacorn) OpenSea use Tenderly to monitor the health of the apps and smart contracts. In fact, the company says that it works with the majority of the top 100 ethereum projects.

Belgrade, Serbia-based Tenderly was founded in 2018 by friends Andrej Bencic (CEO), Bogdan Habic (CTO), Miljan Tekic (COO) and Nebojsa Urosevic (Blockchain Architect) after years of working on the frontlines of software development and being frustrated with what they said were nonexistent tools.

The quartet says they recognized early the incredible potential of blockchain becoming the next core standard of the internet, but also realized that in order for that to happen, the technology needed to be accessible to everyone.

“We started Tenderly as four engineers hyperfocusing on a particular technology, which was blockchain and ethereum,” said Bencic.

The group started out building the tools for themselves – initially for debugging – but now Tenderly has evolved into a developer platform that processes over 25 million transactions through its virtual machine (VM) daily. It now covers a whole range of blockchains such as Ethereum, Avalanche, Fantom, Optimism and Arbitrum. 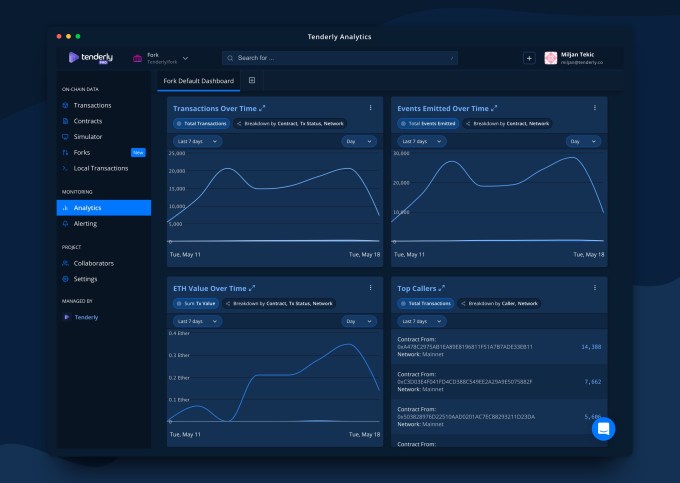 “We’ve worked in close collaboration with the entire community to create a system of tools, services, and infrastructure to help developers quickly ship better products,” Bencic said. “Now we’re taking care of developers at every stage of development – from developing the smart contracts, testing them pre-production, helping them with the supporting infrastructure and in production as well.

While it declined to reveal hard revenue figures, the company has seen a 500x increase in revenue and a 420x bump in users year-over-year, despite not having “proper expertise in the sales department,” according to Bencic, who credits a “deep connection” with its user base for Tenderly’s success so far.

“We’re mostly a product and engineering team still, but we hope to fix that in the coming year,” he said.

The current volatility in the crypto space hasn’t impacted its growth, he maintains.

“If anything, we’re seeing more resolve from developers to explore the web3 space in general,” Bencic added.

Spark Capital led the latest round for the startup, which is opening an office in San Francisco. Existing backers Accel (which led its Series A) and Point Nine Capital (which led its seed round) also participated, along with Abstract Ventures, Coinbase Ventures, Uniswap, Daedalus, Vercel CEO Guillermo Rauch Optimism co-founder and CEO Jinglan Wang; Eric Ries, founder of Long-Term Stock Exchange and Tihomir Bajic, CEO of LTSE Software.

The company plans to use its new capital to continue building out its product offerings, toward customer acquisition and partnerships and the hiring of technical and sales talent.

Spark Capital General Partner Yasmin Razavi, who led the financing, believes the Tenderly suite of products will “significantly lower the barrier for development in web3 and is increasingly empowering developers throughout the entire building journey: from testing to deployment to monitoring.”

My weekly fintech newsletter is launching soon! Sign uphereto get it in your inbox.