Anonymous social apps targeting teens haven’t gone away in the wake of Snapchat’s new policy, which earlier this year banned these types of social experiences from integrating with its developer platform. Instead, the apps have simply found a new way to reach young people: via Instagram. In recent weeks, new apps like Sendit for Instagram and NGL have launched anonymous Q&A apps that allow users to post “ask me anything”-style questions to Instagram in order to receive anonymous responses from friends. Teens flocked to the apps, both of which surged to the top of the App Store after launching.

History has demonstrated these sorts of social experiences tend to be problematic. Online anonymity among teens often leads to bullying and abuse. Snapchat, for instance, ultimately chose to suspend anonymous apps on its platform after being suedmultiple times by families whose teens died by suicide after being bullied on Snapchat-connected anonymous messaging apps. Lawmakers and regulators have also been pressuring social platforms to implement more safeguards for their youngest users.

But as attention today is mainly attuned to how Big Tech is tackling issues around online safety for younger users, indie apps like Sendit and NGL have been able to fly under the radar. And, like the anonymous apps that came before them, they’ve quickly taken off.

According to data from Sensor Tower, the anonymous Q&A app Sendit for Instagram launched on June 24, 2022 and immediately saw 117,000 installs within the first two days, driving it to No. 3 on the U.S. App Store. The app now has somewhere north of 150,000 installs, Sensor Tower says, but exact estimates are not available. Another firm, data.ai (formerly App Annie), sees the app with 266,000 iOS downloads but doesn’t have Google Play data.

It has since tweaked its name to Sendit – Q&A on Instagram. Data.ai also noted the app shot up to No. 1 at launch within the Social Networking category as well as overall in non-gaming apps in the U.S. App Store from June 23, 2022, through June 28, 2022.

The same company behind Sendit for Instagram also operates a version of Sendit aimed at Snapchat which has over 18 million lifetime installs and has generated more than $11 million in consumer spending to date, Sensor Tower said.

Meanwhile, the anonymous Q&A app NGL launched on Dec. 10, 2021, and has seen more than 3.5 million installs to date, Sensor Tower data shows. It reached the No. 1 position on the U.S. App Store for the first time on June 16, 2022, and has now topped $1 million in consumer spending. Data.ai had estimated its downloads were even higher — around 5 million.

There are concerns these apps aren’t necessarily operating on the up-and-up, however.

For starters, Sendit for Instagram users have been complaining in reviews the app had originally marketed itself to them as “Sendit Reveal” during the pre-order phase. The company, the reviews allege, had promised a new Sendit app that would reveal which friends had sent the anonymous messages. Obviously, this was a big draw for the app’s young users, as everyone wanted to know who had said what. 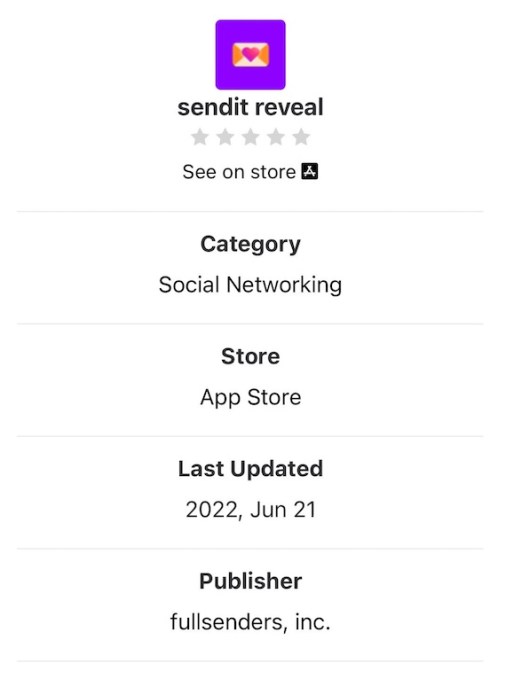 App Store screenshots from the time confirmed this was the case, as well.

The marketing strategy worked. User demand for “Reveal” helped drive installs of the app, which then rebranded as Sendit – for Instagram after launch.

Reached for comment about what appeared to be a bait-and-switch technique to acquire users, Sendit’s founder Hunter Rice didn’t directly address the issue. He suggested that coverage of this amounted to “clickbait” on our part.

“There’s a lot of great things about what we’re doing that are newsworthy,” Rice told TechCrunch. “You’re welcome to have your fun with this topic, but I’m only interested in talking about real news,” he said.

But an analysis of App Store reviews at least indicates users felt they were misled by the earlier branding and had expected a much different experience. 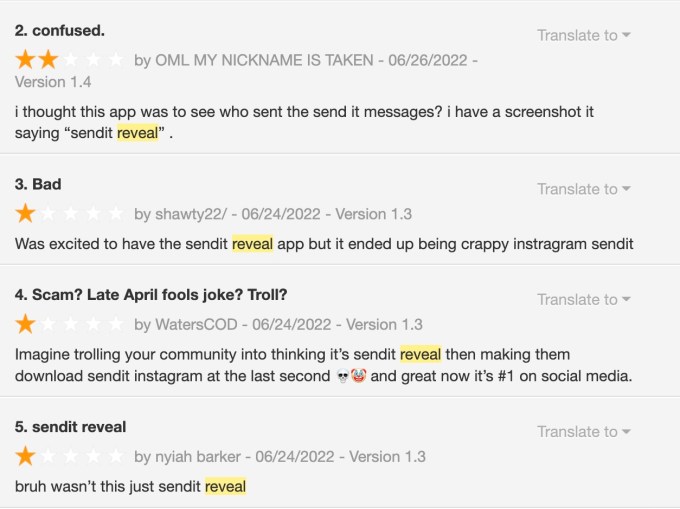 The company behind Sendit, Fullsenders (now publishing as Icon Hearts), had another viral hit last year with an app called Push It. The social app had also climbed to the top of the App Store. At the time, users complained the app was using bots to send them fake questions to answer — things they knew their friends would have never asked, they said. Rice had denied the use of bots at the time.

The flagship version of the company’s Sendit app saw similar complaints about bots, as does its new Instagram version. App Store reviews are again filled with users questioning the legitimacy of the questions’ origins.

Essentially a clone of Sendit, the new app NGL also allows users to post anonymous Q&As on Instagram. To differentiate itself, the app touts its “world class [sic] AI content moderation,” which claims to filter out bullying and harassment.

As it turns out, there are not many complaints about bullying among the app’s 68,000+ App Store reviews. But there are a number of people griping about bots asking them fake questions here, too. Similar to the concerns consumers had raised about Fullsenders’ apps, many NGL users insist they’re seeing questions they believe were not sent in by their friends. Notably, the app is charging users a subscription of $10 per week to “reveal” who sent the question. Users are also complaining this paid service only offers hints like what kind of phone the user has or what area they live in.

NGL did not respond to a request for comment.

TechCrunch tested both apps, NGL and Sendit for Instagram. We copied the personalized links and posted them to an Instagram Story that was only shown to “Close Friends,” then immediately took the post down so no one would see it. This tricked the apps into thinking we had published our link so friends could respond. Several hours later, both apps sent us a series of questions supposedly sent from “friends.” The questions were innocuous, like “the strangest dream you’ve ever had?” (Sendit) or “what was the best day so far this year?” (NGL), for example.

No one had access to the links we had created, so these were clearly automated messages.

We asked Instagram if either of these apps were integrated with its platform by way of Meta’s developer tools, which are governed by its platform policies. Meta, so far, has been unable to provide this information.

App intelligence firm Apptopia told us it only has visibility into NGL at present and found it uses the Facebook SDK in its Google Play version but not in the iOS app. Neither Sensor Tower nor data.ai had visibility into either app’s components, they said.

As the apps only offer the ability to post links to Stories, they aren’t necessarily reliant on technical integrations offered through Meta developer tools in order to function. That means they wouldn’t be held accountable by Meta’s developer policies related to anonymous messaging apps, either.

Meta’s policy seems more lenient than Snap’s as it allows anonymous messaging if apps offer a blocking function. (Section 8.8.2.a of the policy states: “Pages or Apps may not facilitate person-to-person messaging, relays, or interactions that mask user identities from each other without giving individual users the ability to block other users within the messaging experience.”) Meta’s policy also bans bots under its spam section (8.8.2.b).

Recently, it had seemed Meta was taking action against NGL as users began reporting Instagram was removing the links to the NGL app from their Instagram Stories. But Instagram told us NGL had access to the links feature revoked “by mistake” and that access has since been restored.

These Instagram-tied mobile apps arrive at a time when Snapchat is looking to tighten how third parties use its platform tools. That change could impact Sendit’s traction. The app had benefitted from Snapchat’s earlier ban on the anonymous apps YOLO and LMK, which had been cited in lawsuits. But now, Sendit is among those that are supposed to be banned from the platform under Snap’s new developer policies. (Snap told TechCrunch last month it had given Sendit more time to come into compliance with its policies after the developer requested an extension.)

Investing in the anonymous consumer social space almost never pays off in the long term. The web is littered with failed anonymous social apps that have had to wind down due to bullying and other issues, including Ask.fm, Yik Yak, After School, Secret, Yolo, and Sarahah, among others.

In previous years, the app stores themselves had even taken action against apps that offered anonymous messaging experiences. Sarahah, for example, was banned from both Google Play and Apple’s App Store after accusations it was facilitating bullying. Today, Apple insists on a set of protections for any app that includes user-generated content, but it doesn’t ban the anonymous social category in general.

It’s not clear if the app stores will take any action on these new anonymous apps despite the way they’re misleading their young users about the nature of the inbound messages, which are bot-driven and not really from friends.

Without enforced policies, there will always be a new crop of developers willing to risk long-term success for short-term profits. In fact, the business models for this latest group of apps depend on the lack of policy and regulation in this market.